There is a blizzard of holiday films wherever you turn this time of year.

Networks, theaters, cable outlets and streaming services each belch out a flurry of titles, most of which are middling in quality. So how to differentiate a truly bad, laughably weak effort?

I’d wager it’s when a big studio rolls out named celebrities and insists it’s offering holiday merriment that instead leads to a feeling of a Christmas tree fire.

20th Century Fox served up Danny DeVito and Matthew Broderick, with a strong supporting cast, on Thanksgiving Weekend in 2006. With the only holiday-themed competition being “The Santa Clase 3”, already a month on screens, “Deck The Halls” was still roundly ignored and thudded into 4th place.

Let’s wheel this cinematic lump of coal into the lab and find out why this Yuletide film smelled like low tide at the North Pole. 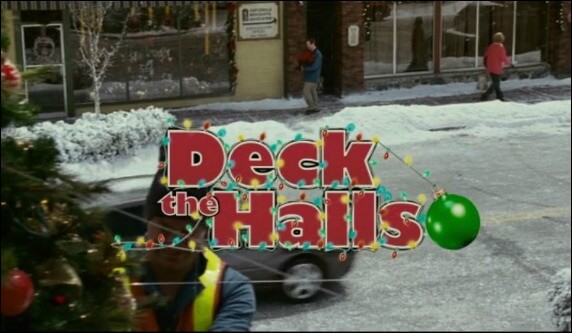 “Better here — or better here?” Broderick drones as he appears blurry on screen. This could be a sign of the unfocused nature of this movie.

Broderick is optometrist Steve Finch, seen here helping a patient. We are served up this merry exchange:

FINCH: You don’t want to be walking around blind on Christmas, Mrs. Ryer.

We now know the level of humor will be no higher than an elf’s waistband.

Steve enters his house and greets his wife, played by Kristin Davis. “Hi honey, I’m home.” He does not broadcast this announcement at the front doorway; it is spoken to her in the kitchen, from one foot away, as she is looking at him.

This romp is directed by John Whitesell, a TV director who has cursed us with “Big Momma’s House 2” and “Malibu’s Most Wanted.” His sitcom touch is in full effect as the lines are delivered with the nuance of a sleigh plowing through a plate glass window display:

KELLY FINCH: You just get so intense at Christmas.

KELLY: When you’re talking about caroling, you shouldn’t have to use the term flanking maneuver!

Watch a video of a sitcom with the laughtrack removed, and you’ll realize how leaden the jokes sound in a vacuum. This movie is a 90-minute version of those experiments.

The Finches’ slumber is disrupted by loud noises. At the window they see a moving van pulling up to the home across the street.

STEVE: Who moves in the middle of the night?

Oddly, he then answers his own rhetorical thusly:

His question of a personal pronoun is answered with an object? “Who makes all that noise — a loudspeaker?!” “Who drives like that — a car dealership?!”

While movers carry boxes into the house one worker stumbles, and a lone Christmas lightbulb lands in the snow. Camera zooms in, fade to black, and SCENE.

Hope everyone picked up on that!

The next morning on the front stoop they meet the new neighbors, Buddy (DeVito) and his wife Tia (Kristin Chenoweth). I’m betting the crass couple will become a source of dismay for the uptight Steve, based on their introductory discussion involving a stripper pole in their bedroom, the theft of his newspaper and referencing Steve’s penis.

To cement the idea that Buddy is repellant we learn he is a car salesman. On his first day the other sales reps send him out to deal with “that tire-kicker out there.” Then we see a shot of an older customer, who actually kicks a tire. 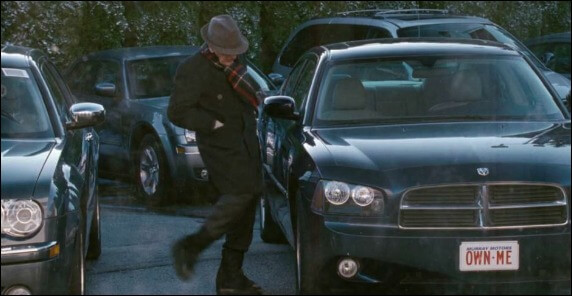 This was a set-up, as the codger outside is in fact CEO of the dealership. Why he is wandering the lot in freezing conditions to look over cars makes no sense. Buddy comes back in 20 seconds later and announces he made a sale. He is such a great salesman he sold a car to the owner! He sold him one of his own cars!

At home that night Buddy’s twin daughters show him a website called MyEarth.com. Wisely Google Earth refused to pony up for the product placement.

Buddy is dismayed that on the website all the neighbor’s homes are visible, but not his own. When he takes out the trash he steps on the dropped Christmas light bulb and he becomes inspired: He will light up their home bright enough to be spotted from space!

Because that is how sane, emotionally stable people think and behave.

The loud noises from Buddy hanging lights brings Steve across the street to confront him. I gather this was supposed to be a mirthful exchange, based on the score aggressively punctuating the discussion. This is a lark filled with comically slow orchestral versions of carols, and punchlines getting underscored with a plaintive bassoon.

Steve gathers the family in matching sweaters for their family Christmas card photo. But they get drawn across the street as Buddy has a life-sized sleigh with two reindeer (horses with antlers duct taped to their heads.) When you are layering the lumens in order to be spotted by Cosmonauts you obviously need livestock in your front yard, in the afternoon.

There was absolutely ZERO reason Steve would become trapped in the sleigh as the horses speed off. Of course, this is EXACTLY what happens.

In an overlong scene Steve careens throughout town in the sleigh. Remarkably he never tips over even as the horses take several corners, the sleigh breaks loose, hits an embankment, launches over a roadway, races down a hill and slides across a frozen pond.

He then falls through the ice — even though he was about 10 feet away from an ice fisherman on the same ice with a lodge that had to weigh at least as much. 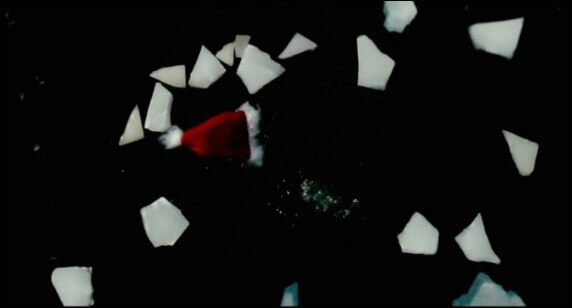 Steve comes to in a sleeping bag along with Buddy for the sake of body warmth. This movie has not inflicted enough pain on us, so we now get the direct implication of a naked Danny Devito and Matthew Broderick rubbing themselves together.

I believe I will need some spiked eggnog to finish this debacle.

Both families drive to a You-Chop-’Em Christmas tree lot. Steve has a private fenced area, where he is growing five years worth of living room elms. Through a series of wildly improbable events, as Steve sets to cut one down, all of his cultivars go up in flames. 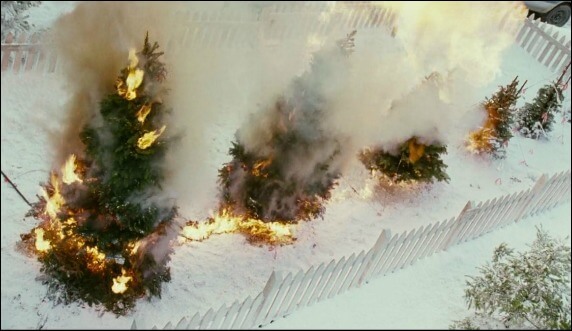 Steven wants to complain to the sheriff about the crowds lining up to see Buddy’s light display, but he can’t get through the line of vehicles. All of the trauma Finch experiences is a direct result of listening to poor advice. On the guidance of a drunken reveller he attempts to navigate between two RVs. The end result: the doors get shorn off of his Volvo.

Unable to get the authorities to help, Steve takes it upon himself to sabotage the light display. He exits his garage dressed like a Navy SEAL – HALO frogman, for the “mission” that is across the street. 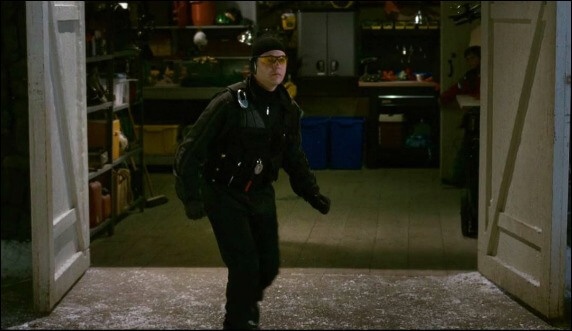 Steve shorts out the entire display with a snowball to the junction box, but this compromises an earlier gag where Buddy was stringing additional power cords from the Finch home. Why aren’t those items still illuminated? We also learn Buddy didn’t need to tap their power; he has a massive backup generator to power everything.

Buddy discovered the snow in his conduit , , , and he just KNOWS it was Finch? The next morning Steve awakens to discover an ornate tree replacing his pathetic fire-stand-in. This was a gift from their neighbor, as is the brand new Jeep SUV outside.

We shouldn’t question how Buddy pulled all this off overnight . . . just like the Finches don’t question Buddy stalking inside their home as they slept.

Later, Steve learns the Christmas tree in the town square has been chainsawed down. He does not put it together the tree in his living room is the same. Next his receptionist informs him the dealership announced he needs to pay for the car, or he’ll be arrested! (Huh?)

This film is so divorced from reality it really needed to be animated.

At the Winter Carnival both wives try to force the men to be friends — as opposed to pressing charges. They stand at a concert and bond, by lasciviously heckling young girls singing on stage. As Steve shouts, “Who’s your Daddy!” you just knew when the singers faced the audience it would be revealed to be their three daughters.

The town holds an annual speed skating competition. Both of the squat, unathletic men claim they are speed skaters. The two dolts make a wager: If Steve wins he retains his title as “Town Christmas Guy.” If Buddy wins, Steve pays off the title on the truck where Buddy forged his signature. This script makes no arrangement if both of them loses. (Buddy wins, not that it matters.)

Continually frustrated his home is not satellite-worthy Buddy continues to expand his light display. Now he addresses the crowd as he commences his programmed LED show with animated displays and musical accompaniment. He announces to Steve’s dismay his show will take place multiple times every day, until 4 am.

Fed up with the disruption Steve tells Kelly, “I can play rough!” His plan involves meeting a back-alley black market pusher – of fireworks.

He arrives at this clandestine arms deal in reindeer pajamas. 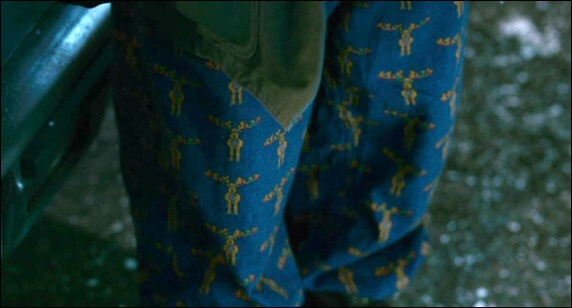 Steve fires off his ordinance at Buddy’s house from his roof, but after a few successful hits he slips and sets off his arsenal on his roof. Then the largest item — The Atomic Warlord – misfires and drops down Steve’s chimney. Ricocheting around the home he races inside to see it detonate in his Christmas tree.

Both wives have justifiably left their un-wisemen. As Steve mopes he hears Buddy pulling down his lights. They hatch some plan to get their families back, and we cut to a hotel room where Kelly and Tia are hanging miniature liquor bottles on a makeshift tree.

The two families discover a path illuminated from the hotel to their homes, made from Buddy’s lights. The two mooks somehow did a week’s worth of work in a few hours. Most of the pathway runs down Main Street, municipal commuting be damned.

The entire town shows up in front of the house, and the gentry will help re-string the entire light display on Buddy’s home, because MTV News is arriving to do a remote feed. We are supposed to buy into this warm-hearted act and not consider the resentment the town would likely harbor towards these two cretins.

In turning on the lights there is a short, and the house is doused in darkness. Everyone whips out their flip phones, and candles, and sings “Oh Holy Night” to display holiday meaningfulness..

Steve’s son spots a cord disconnected, and the home explodes in light. It is then confirmed by MyEarth the home is visible from space. This is a Christmas miracle that gives us the True Meaning of Christmas . . . and . . . that’s it?

Telling that Hollywood tries to give us a morality tale centered on two self-involved men who do their best to spread holiday misery to their families and their township. The studio then crams a happy ending into this disaster like stuffing in a Christmas goose.

The real miracle in “Deck the Halls” is that the citizens didn’t fashion a pair of nooses from Christmas lights and hang these sociopaths like stockings in the town square.

Merry Christmas To All!