Freddie Mercury once asked us, “who wants to live forever?” TV ads toting “age defying make-up” and youthful regimens pop up around the clock.

Boston Red Sox icon Ted Williams (and not, as rumored, Walt Disney) is among a cluster of 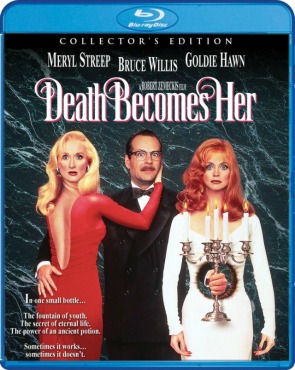 stars reported to be cryogenically frozen. He’s ready to be thawed once death can be cured as easily as the common cold.

This latter example should grab you.

If anyone has found the Fountain of Youth, wouldn’t it be Copperfield?

If celebrities had access to such a thing, wouldn’t that explain how Copperfield, Sophia Loren, Cameron Diaz, Tom Cruise and Denzel Washington don’t seem to age?

Okay, they eat gluten-free diets and have trainers. Still, the notion of celebrities having access to a youth serum sounds oddly plausible.

” is how it taps into what everyone suspects about Hollywood’s age obsession. There’s something unnatural about the need to remain forever young. And, if it were possible to achieve, a Faustian bargain would be in order.

Zemeckis’ first film post-“Back to the Future” trilogy begins as a look at Beverly Hills snobbery. It soon segues into a fantastic, if no less vicious, comical horror film.

Part Jackie Collins, Looney Tunes and “Evil Dead,” it’s PG-13 but utterly creepy and goes for the throat. Only the darkest moments in “Back to the Future Part II” hint that Zemeckis this in him.

The hilarious opening scene establishes both the tone and everything we need to know about these characters. In an obvious send-up of bad Broadway musicals (“Star!” in particular), second-rate actress Madeline Ashton (Meryl Streep) is starring in a tacky musical based on “Sweet Songbird of Youth.” The title: “Songbird!”

The only audience members not walking out are Ashton’s lifelong rival Helen (Goldie Hawn) and her boyfriend, Ernest Menville (Bruce Willis). He’s clearly enamored with Ashton.

It doesn’t take long for Menville to stumble blindly into Ashton’s arms. Her seduction is twofold. Not only is Menville her rival’s boyfriend but a highly regarded plastic surgeon.

To reveal more would be to spoil the fun. This catty, scalpel-sharp send-up of Hollywood gradually transforms into a supernatural farce.

FUN FACT: The film required a seven-month shoot, in part to arrange for the choreography needed to pull off the physical stunts and visuals.

Zemeckis’ film shares the observation of Robert Altman’s “The Player” of the same year. The more wealthy and powerful one becomes, the more they feel entitled to truly terrible behavior.

Billy Wilder’s “Sunset Boulevard” and other works hit this theme first, but “Death Becomes Her” is oddly on-point with the 21st century.

It may have been a bit extreme for 1992 (its mediocre box office success is a possible reflection of this). For 2016 viewers, the film’s satirical targets appear current, if slightly ahead of its time.

In the 1990s, tabloid stories of plastic surgery and egos run amok in California were nothing new. Today, however, with Internet uber-coverage, pervasive paparazzi and online anonymity, the atmosphere of Zemeckis’ film has only become testier.

You could remake this film and have little to no updates required.

“Death Becomes Her” is a deserved Oscar-winner for its startling CGI effects. Alan Silvestri’s superb Bernard Herrmann-esque score is celebrated by soundtrack aficionados. Yet its morbid fascination with real and figurative monsters are what make it prescient and fiendishly imaginative.

Zemeckis’ film taps into a bitter truth about the Fountain of Youth concept: living forever is a selfish desire. Unlike Benjamin Button or those “Highlander” warriors, there’s nothing romantic here about painstakingly maintaining youth. Menville realizes at a crucial moment that living for love means being a slave to the worst behavior, his own and those around him.

The anything-goes story becomes spectacle-driven in the third act, but there are brilliant touches throughout. Who better than Isabella Rossellini (both Hollywood royalty and an exotic outsider) to embody Hollywood’s secrets of age reversal?

While Kevin Kline was reportedly the original choice for Menville, Willis’ surprisingly vulnerable and touching comic turn is among his best. Streep is, likewise, sending up her image. What fun it is to see our “greatest living actress” play a ham. She also taps into a desperation only slightly removed from Norma Desmond.

Hawn’s performance, while as kinetic and accomplished as her best screen work, slyly conveys how self improvement and revenge aren’t very far removed as motivational tools.

The four leads give so much to Zemeckis’ funhouse mirrored vision of the town that employs him, the film maintains its footing.

Among the most outstanding scenes are Sydney Pollack’s hysterical cameo as a baffled doctor and the climactic party scenes, with some very-funny cameos by celebrities I wouldn’t dream of spoiling.

The last act is right out of E.C. Comics. It’s a fitting touch, as Zemeckis was at the time producing HBO’s “Tales From the Crypt.” It’s no coincidence that “Death Becomes Her’s” trailer featured Danny Elfman’s theme music for the cable series.

In fact, “Death Becomes Her” is much better than both “Tales From the Crypt’ movie spinoffs and plays somewhat like an elaborate, all-star episode from the series. Zemeckis’ greatest contribution to the show was his “You, Murderer,” in which Rossellini gave a pronounced tribute to her mother. Antiquated but still intriguing CGI trickery allowed Rossellini and John Lithgow to co-star with Humphrey Bogart.

Zemeckis, like James Cameron, is always pushing the visual effects envelope. In this film, the sight of Hawn rising from a fountain in a most peculiar manner is still a jaw dropper.

The Scream Factory release finally gives this film the Blu-ray polish it deserves.

The new Making Of featurette is stiff, with the focus mostly on the special effects and technical side of the production. While Zemeckis deems himself (not unreasonably) an “illusionist,” his enthusiasm for the film is reserved.

The best reflections come from screenwriter David Koepp, who recalls how the film began as an apartment-set horror film about a man trying to kill his wife, an immortal witch. The featurette ends just when it begins to pick up steam- the actors are finally mentioned and Zemeckis singles out praise for Rossellini.

Much better is the vintage featurette, with brief but welcome sound bites from the actors. While it’s more of a glorified trailer, it offers behind the scenes footage and a sense of fun. The photo gallery is also stronger than expected; in addition to behind the scenes pictures, it offers the lyrics to the opening “I See Me” number and Ashton’s resume.

Turns out, she was in “Skidoo.”

” offers a sharp upgrade of one of Zemeckis’ most underrated movies. It may not be so far-fetched to suggest that Zemeckis and Copperfield, fellow “illusionists,” may hold the secret to immortality.

They just aren’t telling anyone.