Bigger than Ali vs. Frazier!

Nastier than Trump vs. Megyn Kelly!

The story surrounding “Batman v Superman: Dawn of Justice” may have been the most tightly held film secret since “Star Wars: The Force Awakens” got greenlit. The superhero film’s history, though, is firmly rooted in comics stretching back to at least the mid-1980s.

While the duo has fought at various times over the past 70-plus years, the first and most obvious source is Frank Miller’s seminal “Batman: The Dark Knight Returns

.” It depicts a 50-year-old Bruce Wayne coming out of retirement to once again fight the crime that is plaguing Gotham City. His aborted retirement awakens some familiar foes like the Joker and Two-Face. But it also captures the attention of the U.S. government, which dispatches Superman to deal with the caped vigilante.

A Dark and Angry Knight

This pentagenarian Batman still mourns his sidekick Robin, who died, possibly at the hands of Joker. The new movie picks up this plot point – possibly along with his recruiting of Carrie Kelley as the new girl wonder.

The similarities don’t end there:

The series’ climax features Bats and Supes going mano a mano. Batman stacks the deck by manufacturing a Kryptonite arrow (“It took years and cost a fortune. Luckily, I had both.”) He also eschewed his regular tights for some killer armor, similar to what’s been seen in the previews for the feature. 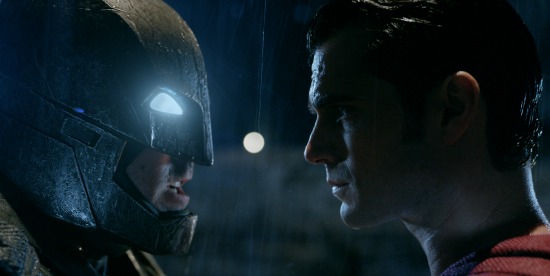 The pair duke it out in Gotham’s Crime Alley, where a young Bruce saw his parents murdered. During that epic fight, just as Batman seems to have Superman on the ropes, Bruce has a heart attack and dies. Readers (and Supes) quickly learn that Bruce faked his death to take the pressure off of his new crime-fighting team.

Focusing on the “Dawn of Justice” tagline, the feature is also meant to usher in a Justice League franchise for DC Comics, as Marvel has so successfully done around the Avengers.

Here the film looks back to 2011’s reboot of the DC universe, in particular the Justice League series. That began by telling the story of how Batman, Superman, Wonder Woman, Aquaman and the rest of the team came together to fight the evil Darkseid, a god-like villain bent on conquering earth.

In the movie, we know that the heroes assemble, and Darkseid can be seen in the trailer. Could he be the real threat that forces Bruce and Clark to come to their senses and fight evil, not each other?

And then there’s yet another creature in the previews, who appears to be Doomsday, another of Superman’s nemeses. You may remember Doomsday famously killing Supes back in the early ’90s.

He’s a Kryptonian creation bent on killing. We’ll have to see whether Doomsday is being portrayed as a Darkseid henchman or whether he’s yet another reason for the Super Friends to assemble.

One thing is for certain, though. DC Comics needs this movie to succeed to make up the ground it’s lost in its film battle with Marvel. And with 75+ years of amazing stories to draw from, the sky would seem to be the limit.