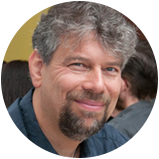 Dave Taylor is a single dad to three children, 17, 14, and 10, and has been writing about his experiences as a parent and father for years at GoFatherhood.com. He’s also nationally recognized as a father’s rights advocate and has written for the National Fatherhood Initiative, Attachment Parenting International, What To Expect Publishing, Huffington Post Parenting and many other sites. He contributes film reviews to ScienceFiction.com, oversees DaveOnFilm.com and is a co-director of the Denver Film Critics Society. You can find him on Twitter as @DaveTaylor