The brothers behind classics like “Raising Arizona,” “No Country for Old Men” and “Fargo” can’t be bothered to assemble a plot for their latest products.

The Coens cheered their last film, “Inside Llewyn Davis,” for its spare, to the point of nonexistent, plot structure. They joked about throwing a cat into some scenes to give the film a dash of cohesion. Maybe they weren’t joking.

They’re up to their new tricks with “Hail, Caesar!” The Hollywood romp begins with enough fizz to fill a Canada Dry assembly line. Slowly but surely the air dribbles out of the production. By the end, no amount of showbiz razzle dazzle can make us care about the characters. What a waste of natural resources given the Coen’s great past and the film’s glittering lineup.

Josh Brolin ostensibly stars as Eddie, a Hollywood “fixer” who makes Capitol Studios fire on all cylinders. Got a pregnant starlet? Eddie will take care of it. Your leading man is too drunk to appear on set? He’ll feed excuses to the gossip columnists until he sobers up.

The unflappable Eddie has his hands full as the movie opens. Superstar Baird Whitlock (George Clooney) goes missing. Esther Williams wannabe DeeAnna Moran (Scarlett Johansson) is pregnant and can barely fit into her mermaid costume. And what can anyone do about cowboy superstar Hobie Doyle (Alden Ehrenreich ), forced to play so against type he can’t spit out his ornate dialogue?

FAST FACT: Josh Brolin’s character, Eddie Mannix, was named on an actual Hollywood “fixer” who worked with MGM. The character’s traits, though, are wholly fictional.

An early scene is vintage Coen brothers. Eddie brings in a group of religious scholars to see if the studio’s new Bible film is offensive. 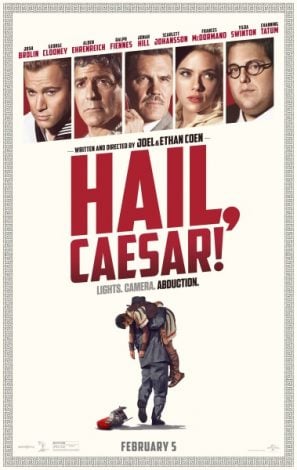 “Hail, Caesar!” is a love letter to Old Hollywood written by someone who sees through the charade all the same. Yes, the old system worked, but boy was it crazy! Sham marriages were the norm. Celebrity images got spit-shined for our approval. Somehow, great movies poured out of the spigot all the same.

We get snippets of such via Moran’s water dance sequence and an irresistible dance number led by Channing Tatum.

So far, so enchanting. Slowly, all the intoxicating threads start wearing thin. What will Eddie do about a pending job offer? Is Baird in real danger?

By the final act we’ve stopped caring. And the best jokes are in the rearview mirror.

The Coens introduce so many “name” performers – look, there’s Jonah Hill! – but gives them little to do. Clooney reminds us how good he can be when he stops being a Handsome Movie Star. Still, his character arc is deflating. His captors, oddly dubbed the Future, are Communists eager to revolt against the Hollywood system.

The Future? Is that a knock against how far left Hollywood would eventually turn? Are the Coens mocking today’s actors as empty vessels given how Hobie and Baird are depicted?

Some scenes burn too many calories for the resulting laughs. Watching Hobie mangling a refined line of dialogue is funny. So are Ralph Fiennes slow-burns as the film’s director. The gag takes forever to wrap all the same.

And just when it seems like we’re getting to know Eddie, we meet his dutiful wife. She’s given about 50 seconds of screen time to leave her mark. Maybe it’s the Coens’ commentary on the limited role women had in the ’50s. As a storytelling device it’s still a buzz kill

The less said about the film’s finale, the better. The Coens have always seemed disinterested in how their movies wrap. Now, their films may be equally well known for their meandering storytelling.