The former featured a tiny budget and a dearth of A-list stars. The latter shattered box office records thanks to its Oscar-nominated lead and $58 million budget.

The quality chasm between the two is even more pronounced. Smith says it’s one reason the right is losing the culture war.

“For some reason the left is always more willing to invest in the arts and pop culture,” Smith says. It’s time to fight back, and he says satire is often the best weapon. 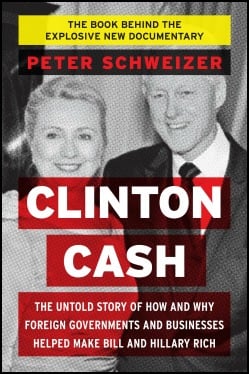 It’s why he co-created “Clinton Cash: A Graphic Novel

The book adapts Peter Schweizer’s “Clinton Cash: The Untold Story of How and Why Foreign Governments and Businesses Helped Make Bill and Hillary Rich

.” The graphic novel is a feisty, yet accessible, retelling of how the Clintons gamed the system for personal gain, And, it appears, did the bidding of those willing to cut them massive checks.

It’s all told in a format unlike your standard white paper. That isn’t an accident.

“I’m not interested in preaching to the converted. I wanna go and get as wide an audience as possible,” he says.

Smith’s “Clinton Cash” bumped “Batman: The Killing Joke” out of the number one slot in the hardcover graphic novel category in its first week of release. It also came in fifth overall on Amazon’s bestseller list during that time span.

How did Smith make that happen? He teamed up with a veteran comic book writer with similar sensibilities.

Chuck Dixon has written for The Punisher, Batman and a crush of other major comic book titles. He also helped create Bane, the foe later featured in “The Dark Knight Rises.”

“His sense of humor is very similar to mine,” Smith says. “His politics aligned with mine as well … he would be fearless. He’d go where I wanted to go.”

Their task: “take all the things that the left has done to us for forty years and turn it back around on them. And we have the truth on our side,” he says.

The mainstream media pored over Schweizer’s “Clinton Cash” upon its release. Reporters appeared eager to debunk its arguments. They couldn’t do so, beyond some minor factual errors. The thrust of its core arguments remain.

Smith and co. made sure the same would be said of their graphic novel.

“All the information from Peter’s book is in here, all the damning info,” he says.

The graphic novel team took a little creative license to share how the Clintons “completely and totally screwed the people of Haiti,” Smith says. The graphic novel introduces us to a Haitian family impacted by the massive earthquake that devastated the nation. Later, they were victimized by the Clintons’ collective greed.

The Clinton Global Initiative vowed to help Haiti recover. Instead, it delivered unsafe trailers while Clinton cronies lined their pockets. All the while, ordinary citizens suffered.

“Of all the people the Clintons have screwed over, the people of Haiti are number one,” he says.

So far, liberal media outlets have virtually ignored Smith’s graphic novel. Even some conservative outlets haven’t covered its release or instant success. That’s a shame, since a graphic novel can reach a whole new audience that should hear its message, he says.

“The right gets comfortable and lazy writing books and giving speeches. It’s all just preaching to the converted,” he says.

Smith is in discussions about follow-up projects along the “Clinton Cash” lines. It won’t be easy.

“We had a hard time finding people to do ‘Clinton Cash,’” he says. Some potential collaborators seemed interested at first. Later, they told Smith they didn’t want to burn any industry bridges within the comics community.

That isn’t always the case, though.

“There are artist out there, some of them lean left, but they’d still take the job,” he says.

Smith savors the early sales figures for “Clinton Cash.” It’s not enough to stem the liberal tide in popular culture.

“The right hasn’t even fought the culture war … they’ve sat on the side lines,” he says.