I was fifteen years old. Just got my driver’s permit. Just asked a girl on a date. Just discovered The Clash. Just diagnosed with Leukemia.

Needless to say it was a whirlwind of a year. Change happens quick when you’re that age – a little faster than usual in my case. Ok a LOT faster.

I can only describe it like this: imagine getting a glimpse of a world-sized playground. Endless wonders, limitless discovery, big fun. Then the doors get shut on you. You don’t get that. You have something called cancer. You may never get that. 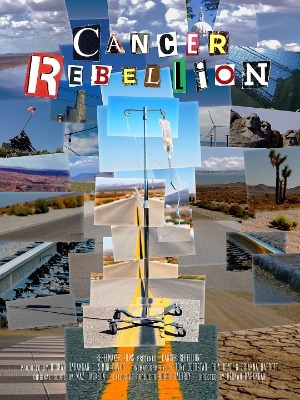 To say the least I was pissed. But more than that, I was scared. I had my family, but I felt completely isolated. It seemed that I was the only teenager in the entire hospital.

I may have looked stoic on the outside but deep inside I didn’t expect to last long. In my head at night I’d think “Good night, Westley. Good work. Sleep well. I’ll most likely kill you in the morning.”

(First person to name that movie gets an avocado.)

So it was kind of a surprise when a couple years later, on the other side of a lot of chemo, remissions and a bone marrow transplant – I was cancer-free and looking at colleges. I had this notion that I could become a filmmaker – after all I had just spent all this time watching movies. I also had a vendetta – I hated the way cancer was being portrayed in films – and I was going to change that.

Of course at the time I couldn’t even say the word cancer. My vendetta would have to wait.

The years passed but the feeling stuck – I was alone, and death was probably right around the corner. I ran as far as I could. Tried to put the entire thing in the rear-view mirrors. (Turns out an experience like that isn’t something you can run away from.) That’s when I finally met someone who was also young, also diagnosed with the same cancer – and it opened up a whole new world.

FAST FACT: According to Cancer.net, childhood cancer survival rates were 58 percent in the mid-1970s. Today, due to medical advances and clinical trial participation, that number stands at 83 percent.

Whereas before I was avoiding all things cancer-y, I began seeking out other survivors. When we shared our stories, there was a level of understanding that I had never experienced with ‘normal.’ Our experiences were so fiercely individual – and at the same time so recognizable. My Spidey-filmmaker-Senses started tingling.

There’s a story in this.

So I started making short films about cancer – as a proof-of-concept. I knew that if I could collect enough stories – they would fit together somehow. And a story told in numbers is stronger than one told alone. (You’ve seen “The Avengers,” I assume?) If I could craft that story – it would be undeniable.

That’s when I met Roger Daltrey.

Calling all rock n’ roll lovers! $10 gets you 100 entries for the chance to meet the rock legends @TheWho and #EddieVedder! Enter on @IfOnly! The best part? Proceeds will help support our cause! #HangWithTheWho (https://t.co/ptfZCZ9AAN) pic.twitter.com/K8d7UfwOMv

Turns out he was just starting his charity, Teen Cancer America, out here in LA. Talk about timing right? The real amazing thing was that here in front of me was a true rock legend – that also knew everything about what it was like to be a teenager going through cancer. More than that he understood it. And he understood what I was trying to do.

To make this film, I needed to go to all fifty states. I knew about the experiences of teenagers and young adults around me in California – but what was going on around the country? How is it for someone in New York City? In Montana?

I wanted to create a state of the union about youth cancer.

I started gathering gear and crew. And though I seemed stoic on the outside – there I was again – deep inside I was scared. I was about to immerse myself in the day-to-day lives of young cancer patients – and I was going to spend the next X amount of years in that world. What if I couldn’t take it? What if by saying the word cancer so many times I was invoking the boogey-man?

What happens when I run out of road? I laid myself at the mercy of the elements – and I knew that in order to make anything worth its distance in miles – I would have to become absolutely vulnerable. To my hopes, to my fears, to fate itself.

I turned the ignition and hit the road.

All in all, I interviewed 100 people. Collected 28 Terabytes of footage. Drove nearly enough miles to circumnavigate the Earth. I look back on it as the most invigorating road trip of my life. Not merely for the beautiful tapestry that makes up the landscape of America – but for the beautiful tapestry of people I met. Woven together, they are the story of “Cancer Rebellion.”

I’m really proud of this film – it’s the culmination not just of that road trip but of my entire life since cancer. I know it’s a hard sell – I mean who wants to watch a movie about cancer? Sounds like a downer. Well remember my vendetta? Do you really think I’m going to make a downer film?

“Cancer Rebellion” is an action movie. It’s a wry comedy. It’s a road movie. It’s a coming-of-age story that ends with Judd Nelson Fist-in-the-Air blowing up the Death Star and getting a gold medal from Princess Leia. And when it’s over you’re going to leave the movie theater kicking trees and smashing your air-guitar.

I’m super stoked to say it’s available for pre-order on Amazon and iTunes now before its May 28 release. So go there and together we will change the world.

Hernan Barangan is the director of “Cancer Rebellion.”