Every so often a title crops up that makes you pause.

Looking over the release schedule you frequently find curiosities, but this one — this caused the brakes to lock up in confusion. C’mon…it can’t be a sequel to THAT movie, can it?

Somebody felt it was wise to create a follow-up to a 23 year old quasi-buddy cop film with Adam Sandler and Damon Wayans that barely earned $20 million and sits with a deplorable 8% on Rotten Tomatoes.

For this endeavor they also hired Don Michaael Paul, a veteran of numerous direct-to-DVD sequels. Think “Jarhead: Law of Return” and “Death Race 4: Beyond Anarchy.”

This…this is what some low-level executive toiling in a cubicle felt would be a good idea.

This title is not so much wheeled into the lab to determine COD, but it’s exhumed to trace the DNA of the thought process behind green lighting such a property. Rather than a forensic exploration maybe a carbon-14 spectral analysis will be required.

At least one mystery is cleared up by the first title card. This film was produced by Universal 1440, a home video distribution arm of Comcast. It’s known for producing sequels to long-in-the vaults titles. This division recently made ‘’Backdraft 2,’’ ‘’Doom Annihilation’’ and ‘’Kindergarten Cop 2.’’ They even went so far as to make ‘’Cop and a Half: New Recruit,’’ so suddenly this one looks slightly better.

In a large van parked in Rome, DEA agent Jack Carter (Faizon Love) is grousing about the fact that he should be making love with Italian models but is stuck with two INTERPOL officers.

CARTER: ’’But no — they got me in this bozo van, with Itchy and Scratchy, who think ‘Rocky’ was a damned documentary.’’

I’m certain this will prove to be a crucial plot point, and not just some ad-libbed dialogue that is supposed to sound compelling and humorous.

The Italian guy seated beside Carter mentions that, ’’I cannot believe they made a movie about you.’’ He says he could only find it on Pirate Bay, and then the third guy crawls up and declares he just happens to have a magazine that features this film mentioned, with Carter and Archie Moses posing on the front.

You know, in case this conversation came up, during their stakeout. So, Carter is an agent who works undercover while also appearing on the cover of national periodicals. Sure.

Back in Los Angeles Carter is in a beef with his commanding Sergeant. In flashback we learn that as Carter approached their target he dropped his gun and shot a bodyguard in the foot. The Sergeant is concerned the bullet shrapnel in Carter’s skull from a previous shooting is affecting his ability to work — not the fact that Carter weighs over 300 pounds and walking is a challenge. 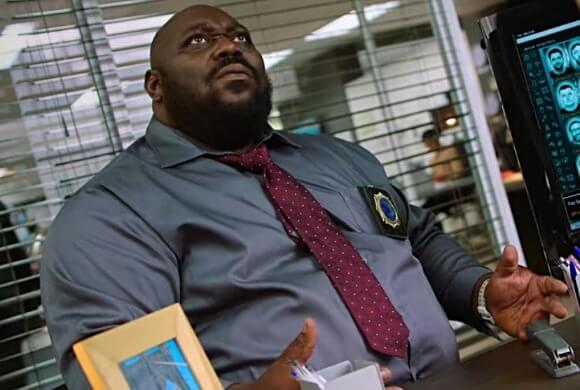 Despite voicing concerns on his mental acuity the sergeant tells Carter his next assignment is to take down a Mexican drug cartel. Naturally. Does he call for Carter to undergo a mental competency analysis? No, he sends him out to break up an international drug syndicate.

He will catch the Mexicans by…going to South Africa. Ummm…whut? This seemingly has everything to do with the Mexicans looking for another drug source, and not that the film’s financing came out of that country.

In a deeply convenient piece of irony Carter will have to assume the identity of Archie Moses. This is because Archie conveniently happens to be in South Africa and the Mexicans never met him, so Carter can pose as him. This is all due to Archie serving time in a Mexican jail and making contacts inside the cartel. The cartel we are told now does not know him personally … wait … whut?

After two months undercover Carter sets up a meeting between the Mexicans and the South African drug lords -- the Schmidt Syndicate -- led by an annoyingly hyper guy named Spyder. The Mexicans arrive, on another continent, all driving different 1970s muscle cars, because of course that happens.

This henchman — direct from Central Casting. 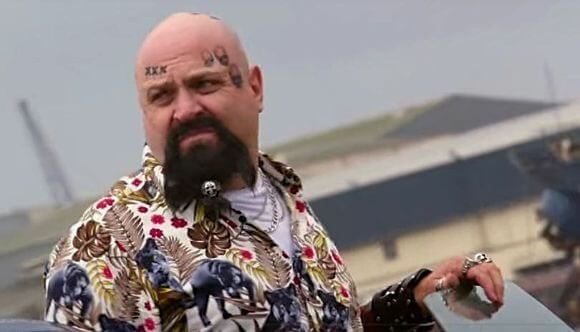 For no reason Spyder pulls out an automatic weapon and the meetup explodes in a gunfight. (This could be retitled ‘’Squibs: The Movie.)

Carter/Archie takes cover and at one point gets into a fistfight. Before a punch actually lands we see Faizon grimace, turn his head and his body twists. That’s not too uncommon in bad films, but the effect is made worse by this being shot in super slo-mo. He almost looks doubled over before the blow lands.

In a flashback Carter is visiting a doctor to discuss the bullet lodged in his brain, a reference to the shooting in the Wayans/Sandler film. The doc says he’s worried about removing it and causing more harm than good. He recommends no intense physical activity, then even dictates Carter cannot have sex, and ‘’No Tacos.’’ Because those … would affect the bullet?

After the shootout Carter needs to find Archie to alert him the Mexicans want to kill him. The DEA knows he’s been working at a strip club in Cape Town for six months. Carter meets with Pinkie, the stripper-owner, who asks if he is gay by saying, ‘’Are you a homeowner?’’

When he gets around to asking for Archie we learn from her that ‘’He works ‘gravy mop-up’ for me.’’ This is clever banter in the script.

Finally we get the reunion of Carter and Archie, but instead of Adam Sandler we have Kirk Fox, who played a slimy refuse technician on ‘’Parks And Recreation.’’ Here, he ramps up the sliminess, while falling well short of Sandler in the humor dept.

It’s one thing to show when a film cannot keep the plot in line, but managing to bugger the details within the same scene is pretty impressive. Carter tells Archie that as long as his cover isn’t blown he can protect him. Then we see the Mexican hit squad outside, looking for Archie, not Carter.

So his cover is already blown. But — this is because they have pics of Archie drinking with his former cartel contact. This means that all the talk of the Mexicans never having seen him is tossed out. And the shootout scene is also screwed, because those Mexicans did not know Carter was not Archie, but these Mexicans…do now know…WHUT?

The hit men enter the strip club and a lengthy gunfight plays out, with numerous naked strippers involved in the gun play or hitting hit men with liquor bottles. In the end the guys are saved by Pinkie, after she uses her shotgun on a few assassins.

I must say, she seems remarkably happy about it all considering the place is shot up and partially on fire. She even offers to have Carter and Archie sleep at her home.

The following morning we get treated to the visage of a completely nude Faizon Love because we have not suffered enough in this slog already.

Tires screech/record scratch/room-falls-silent time. Carter and Archie are en route to the family drug syndicate, but for script convenience they stop off to eat. This is to give us the attempted justification of this entire film.

Wait, wait…WAIT! They are trying to sell us on the concept that these two are real, and that Sandler and Wayans portrayed them in the original film? A grouchy inept agent and an unfunny hoodlum who perpetually looks in need of a shower were deemed Hollywood material — sure they were.

This makes for one of the most strained attempts to justify a sequel … ever.

They meet up with Spyder, but after Carter tells Archie to keep quiet he instead ingratiates himself to Spyder by insulting Carter. Director Don Michael Paul lets Fox ad-lib for over a minute about the size of Carter’s penis.

Archie will supposedly be brought in to transfer the millions of the Schmidt’s drug money onto the gift cards, then transferred to an offshore bank. They ride in Spyder’s boat to a vineyard, where the Schmidt Syndicate operates. We are supposed to be bowled over when they pull up in dune buggies and we learn that they are women.

We are not bowled over.

The one gal named Jo shows obvious interest to Carter. In every single setting we have to buy into the idea that the obese Carter is irresistible to every woman and stripper in this affair.

The Schmidts suspect that Carter and Archie could be DEA, so they drive them at night to have them shoot an apartment with a rocket launcher. The target is a local agent they both know, so to stall and allow him to get out we endure minutes of Archie talking about how it’s an RPG-7, ‘’But I’m a 6 guy, I hate the 7…’’ This is delivered repeatedly, as if it’s uproariously funny and not toss-a-beer-bottle-at-the-screen annoying.

Gratuitous nudity is frequently used in these films to wallpaper over weak scripts. Now we get half a dozen women lying by the pool completely nude … in the middle of the night.

The next morning Archie is nervous, and then the family informs them they have figured out how to transfer the cash without his help. Archie panics and shouts out that Carter is DEA. This leads to overly long scenes in a tool shed where the duo is tied up and Kirk ad-libs more to ill-effect. They mistakenly thought filling up airspace was the same as being amusing.

While Archie was exposing them at breakfast Carter had dialed Pinkie so she could hear what was happening. Now she creeps into the shed and gets the drop on the henchman tormenting our … heroes. How a stripper found their location, arrived at the remote spot in short order and got past the armed guards on the property are not important questions to ask.

Eventually the boys get free, then as the Schmidts are about to go to an airport our trio steals one of the dune buggies. Mad at the lead henchman for letting them escape, all the Schmidts open fire at him, in this scene from ‘’Bulletproof 2: Squibs Aplenty.’’ 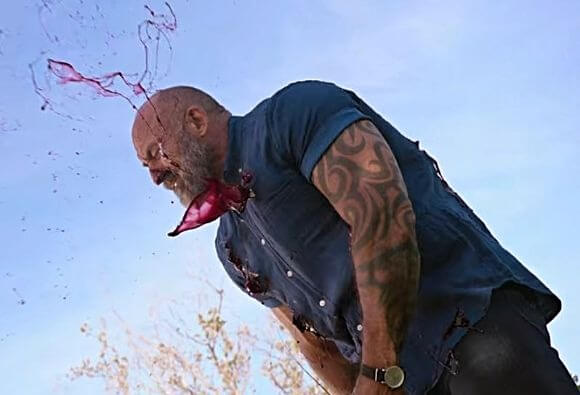 It seems the climax will be primarily a car chase between all the dune buggies. To make this seem compelling we have bad cops joining the chase, good cops in a chopper, split screen scenes and an impressive amount of tires squealing on the foley track while driving in sand.

They all retreat inside an abandoned resort home. Carter gets the drop on Spyder, and is saved when one Schmidt is about to fire on him, but Pinkie comes in to drop her. Seriously, these guys would be dead three times over if not for this stripper, who has more skill than an agent and a hoodlum.

Spyder next has Archie held with a knife but Carter shoots him THROUGH Archie. This makes them even, for the bullet in his head, we presume.

In the hospital we see Carter has been operated on for his bullet. Archie and Pinkie are visiting, but as he leaves Archie mentions how he will get back into the thug life, having nabbed some of the loaded gift cards during their getaway.

Then we get the very last shot, that of the Sergeant back in Los Angeles. He’s on the phone, and angrily says, ‘’F—ing Carter!’’ for no discernible reason. This leaves us saying, ‘’WHUT?’’ one last time.

To call this a pointless sequel is to traffic in redundancy. Every aspect of this film conveys the feeling of ‘’cut rate” from the distancing settings, the empty plot and the sub-par cast. It’s not even like they had a script and just decided to rename it with a previous title.

You have a hard time seeing this as a generic sequel as this is a vacant entity — it cannot be deemed a knock-off since there is no product here at all.

It’s one thing to say there was no reason to remake this property; the amazing thing is they gave no reason at all to watch it.