“The Graduate” hit theaters as the Vietnam War roiled the nation and men Benjamin Braddocks’ age often found themselves on the front lines.

Only those elements didn’t make their way into Mike Nichols’ film. It’s one reason “The Graduate” matters as much to today’s young audiences as it did back in the ‘60s.

That wasn’t the case with other films from the era, says author Beverly Gray.

“So many people were trying to make movies that referred to the issues of the time. Those movies are interesting but they’re period pieces [now],” Gray says.

Her new book, “Seduced by Mrs. Robinson: How “The Graduate” Became the Touchstone of a Generation

,” delves into the factors that made the 1967 film both iconic and timeless. Gray’s book shares key insider information on the film’s creation and explores its enduring legacy.

They’re all indelibly stamped in pop culture lore. But why? It’s partially because being young can be isolating, no matter your family’s fortunes.

That sense of isolation continues to fascinate us. Gray says it flowed, in part, from the man behind the camera. Nichols fled Nazi Germany’s clutches at the age of 7, arriving in America without knowing the language.

The fear he left behind wasn’t easy to shake.

The young Nichols recalled seeing Hebrew writing on American store fronts and worrying if it was allowed. “It is here,” his Dad reassured him. That was the first of many seismic changes to imprint on his young mind.

“He had a new name, new everything. He knew what it was like to feel out of step,” she says.

“The Graduate” was based on a 1963 novel but history quickly overwhelmed the story. The nation lost a president, sent its young men off to war and watched the civil rights movement erupt, she says. How could any one movie capture it all?

“Nobody was thinking, ‘let’s make a movie about our time.’ They were thinking more about the young man who doesn’t know what he was doing,” she says. The story avoided the headlines, sticking to emotions that would resonate in any era.

“I don’t want the choices my parents made on my behalf,” she says.

The film’s impact went beyond box office numbers. She says Nichols embraced a more Euro-centric aesthetic with the film, impacting how future filmmakers composed their shots.

Simply casting Hoffman proved revolutionary, too. He wasn’t a star … yet. He also didn’t look like his box office predecessors. 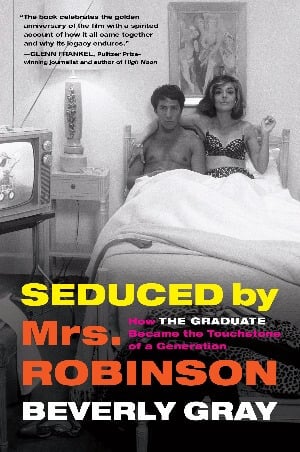 “He was not the tall, handsome, Robert Redford kind of guy,” she says. In fact, some pitied Nichols for miscasting the lead role.

“Young people certainly got it,” she says. “They fell for this guy partly because they could see themselves in him.”

Gray reports one actor didn’t take kindly to the industry shift. Steve McQueen’s wife told the author Hoffman’s ascent, and what it meant for the industry, left him feeling insecure.

“Is this what they want now?” McQueen wondered.

“I love the small movies that look in on someone’s life in an unusual way,” she says. “I hope people in Hollywood can still make money that way.”

Gray says her own relationship with “The Graduate” has evolved over time. Where she once identified with young characters like Hoffman’s Benjamin and Kathleen Ross’ Elaine she now connects to Benjamin’s parents more than expected.

“They were clunky about it, but they wanted [Benjamin] to succeed,” she says.