The teenage world is so drastically different from 30 years ago, when “Pretty in Pink

How, without selfies, snapchat and texting can a story about high schoolers still work? Because it’s themes of love and alienation are timeless. Because the characters nail their sense of loneliness like Orchestral Maneuvers in the Dark captured the eighties.

Let’s break it down. 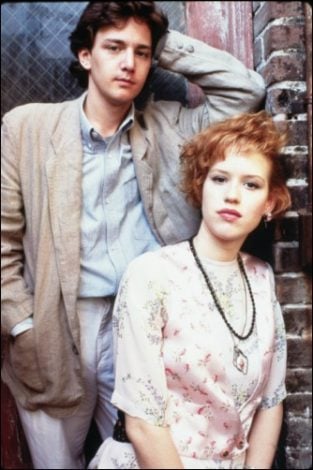 Long before the artsy, hyper-sensitive cast of New York City “Girls” exposed their hearts and regular bodies, Molly Ringwald’s Andie gave us Everygirl. Whether you were surviving high school in Dubuque or Fresno, it sucked to be bullied by blonde, rich brats. No anti-bullying campaigns in the indulgent eighties.

She exudes that tempo where lots of us lived. Not-popular and potentially-fringe, pretty but not mainstream, broke but not low-class. The outsider character here is actually more authentic than a later teen classic, “Mean Girls” because she doesn’t attempt to shed her vintage garb and fit in. Just like her principal admonishes.

In this day of constant communication, broadcasting of feelings 24 hours a day, it’s hard to believe that a lead character, well, all of the characters, have such a hard time expressing themselves. Jon Cryer’s Duckie can’t tell Andie he loves her. Blane (Andrew McCarthy) does tell her he loves her but his mom doesn’t, so that’s the end of that for a while.

Imagine the scene when he is gloomily lying on his bed as his landline rings and rings, a furious Andie on the other end. Would our girl be texting like a woman scorned? No way. The Duck Man has her back, and Iona provides the poor kid a job. Speaking of Annie Pott’s character, she surely would have met that normal pet shop guy on Tinder, no doubt. Andie has the affections of the sexy prep-jerk Steff (James Spader), who would rather get pummeled than admit how he feels.

She cares for her bum of a father (who is probably cauterised by more than grief, though the movie never says) with quiet restraint. Duckie loves Andie, but only manages to share this with the bouncer barring him entry to the resident club. Says the sage meathead played by none other than that eighties staple Andrew Dice Clay, “Love’s a bitch, duck, love’s a bitch.”

She is a winner stuck in a loser’s box who, were she coming of age now, wouldn’t be plastering selfies all over Instagram. No, she’d be an Etsy girl, selling her offbeat creations online and squirreling the cash for college, anywhere but here. As a matter of fact, with today’s hybrid notion of what is normal, Andie wouldn’t even have stood out. 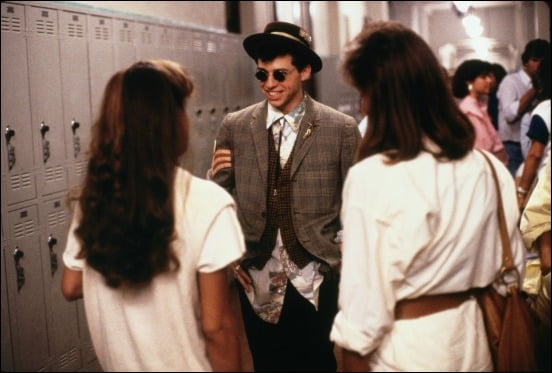 Duckie was a hipster way before his time. The party scene at rich boy Steff’s parent’s mansion is so familiar to people of a certain age who grew up in the era of high school keggers. Gone are those days. Notice that no one is popping their mom’s pills or videotaping sexual imbroglios with blasé ennui. Nah, back then it was joyful, dirty fun.

“Pretty in Pink” will always work because it just doesn’t work too hard. It’s not showy. Those melodramatic moments are balanced with acute insight into the young heart, and the good guys win in the end. After dozens of viewings, I still get a lump when Blane realizes their love will never work and starts avoiding Andie. Only she won’t let him get away with it:

Andie: You’re ashamed to be seen with me.

Andie: You’re ashamed to go out with me. You’re terrified that you’re goddamn rich friends won’t approve. [hits Blane] Just say it! [hits him again] Just tell me the truth!

Blane: You don’t understand Andie, it has nothing at all to do with you. [Andie runs away]

So thank you Molly Ringwald, James Spader, Jon Cryer, Andrew McCarthy and John Hughes for “Pretty in Pink.” Your take on the teenager has aged beautifully.