The author’s love stories are red meat to anyone craving romance minus any elitist angst. Hollywood has all but ignored this demographic of late. Enter Sparks, who embraces his self-made genre with alacrity.

That means we’ll have to put up with those Sparks-sized plot twists, the kind that threaten to take you out of otherwise endearing tales like “The Choice.”

Travis is the kind of sweet-talking Southerner who can chat up two girls while making moves on a third. Benjamin Walker plays the aw, shucks womanizer, and he makes every syllable of his inflected English count.

He still isn’t prepared to meet Gabby (Teresa Palmer). She’s his feisty new neighbor who accuses Travis’ dog of knocking her pup up. In the annals of “meet cute” history, this ranks near the top. That’s not a bragging point. 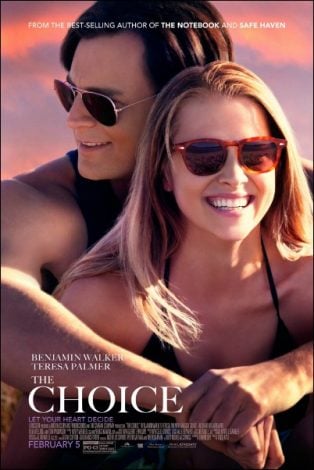 No matter, since the characters connect and so do the stars. Only this love isn’t without complications. Gabby already has a steady beau (“Smallville’s” Tom Welling”). And, since Sparks wrote the 2007 novel on which “The Choice” is based, there’s an out-of-left-field twist to threaten the romance.

That twist is telegraphed in the opening. That doesn’t make what follows feel any less manipulative. It’s what Sparks fans accept from his stories – larger than life obstacles to match the overripe emotions.

Even Sparks loyalists will wince a time or two during “The Choice.” An on-screen proposal will elicit more eye rolls than ears. And how many cute puppy reaction shots can anyone stand?

Little could derail Walker’s performance. It’s a potential star-making turn from an actor with the mug and makeup for juicier parts. Palmer melts on cue appropriately. She also keeps us on her side even when her character acts like a spoiled brat. That’s not as easy as it looks.

Sparks’ stories aren’t for everyone. Look all you want, but you won’t see much in the way of grit or indecent behavior. At a time when anti-villains rule and having an edge means harsh language and athletic sex scenes, “The Choice’s” restraint is downright refreshing.

A boy. A girl. A complication or two. And a gorgeous North Carolina coast that seems designed by the state’s tourist department. “The Choice” offers all of the above without apology. Sparks fans known what to do next, and they won’t be disappointed.

DID YOU KNOW: ‘The Choice’ star Benjamin Walker once worked as a stand-up comic.