Feel a bit uneasy about your love for slasher movies? 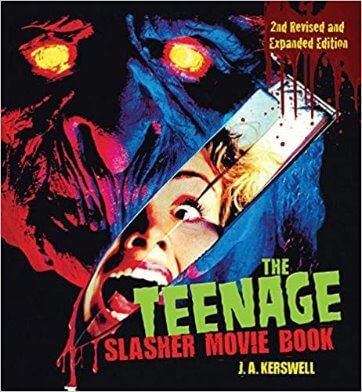 a compendium of more than just history’s most vital slasher movies.

It’s a love letter to the genre signed in sticky red ink.

The book, out Oct. 9, details the rise of an unlikely subgenre. Yes, we collectively point to the 1978 horror classic “Halloween” as the genre’s unofficial start.

What follows is a dutiful lineup of both critical slasher films (“Friday the 13th,” “Psycho”) as well as straight to video fare which fleshed out the genre, often for the worse.

“The Teenage Slasher Movie Book” tantalizes with talk of the films’ political context and the behind-the-scenes tidbits that will make horror fans’ blood boil. We crave more, from finer details from the masters of the genre to the commercial implications of their best, and worst, work.

The book ends up affirming a fan’s passion for these films without moving beyond the initial applause.

Some sections of the book deliver as we hope. Kerswell explores the creative history behind John Carpenter’s “Halloween,” sharing essential bits along the way.

Who knew the reasoning behind a William Shatner mask becoming the face of pure evil? Or that the the film struggled to find a distributor, or the uneasy way Carpenter and co. approached the first sequel?

The latter is even more interesting as several key franchise players reunite for the Oct. 19 sequel, also called “Halloween.”

Other passages skip over fascinating subjects with only a cursory glance.

Kudos to Kerswell, founder of the slasher movie website Hysteria Lives!, for praising unsung efforts like 1979’s “Tourist Trap.” The low-budget affair is one of the decade’s creepiest efforts. Other films are admitted dreck, yet the book spends enough time with them to ask a simple question:

FAST FACT: The 1978 horror film “Halloween” earned $47 million at the U.S. box office. Its budget? Reportedly $325,000 according to boxofficemojo.com.

What’s intriguing about this walk down horror’s blood history is how some things never change. One section recalls how the mighty Siskel & Ebert personally tried to sabotage the genre. Elsewhere, we learn how some slasher films enraged feminists of the era.

The outrages sound suspiciously similar to modern times, one way revisiting film history can be so valuable.

We also learn more about the “Final Girl” trope, a decidedly feminist spin that offered the genre little protection. Back then, attempts to stifle the arts backfired. Today, the Social Justice crowd has more muscle, sadly.

Kerswell knows the subject matter intimately. He’s also not blind to its flaws and excess. That means you can trust the mini-reviews spread throughout the book even if you don’t always agree. His prose strikes just the right tone, too, teetering between geek speak and a sober understanding of the genre’s appeal.

” is a glossy affair with plenty of photographs and film poster images to make it a fine coffee table material.

The subject matter deserves more, though, and one suspects the author is fully capable of delivering for future editions.