The film recalls how BP helped turn the Gulf of Mexico oil rig into an inferno that cost 11 people their lives. The movie features BP executives all but twirling their mustaches in unabashed villainy.

That’s not why you should see the film.

It’s rousing entertainment, a tip of the cap to hard-working Americans and a cautionary tale all in one.

Mark Wahlberg stars as Mike Williams, chief electronics technician for Deepwater Horizon. He’s about to start a three-week stint on the isolated oil rig. He barely settles into his routine before red flags start waving around the work site.

We know how wrong he’ll soon be.

The rig’s security guru (Kurt Russell) isn’t satisfied, but a subsequent safety check convinces him to let the work proceed.

FAST FACT: 126 crew members were working aboard the Deepwater Horizon when disaster struck. More than 50,000 barrels of oil a day rushed out of the doomed oil rig for 87 days before it was closed.

We remember the ghastly headlines from 2010. All too well.

What might have been a by-the-numbers disaster film is so much more thanks to Berg. He cares about the people on the rig. They get to watch them bicker and bond in ways that flesh out their lives, rather than kill time before the “cool adventure stuff” happens. We feel like we’re eavesdropping on the at work, and their dedication and intelligence is captivating. 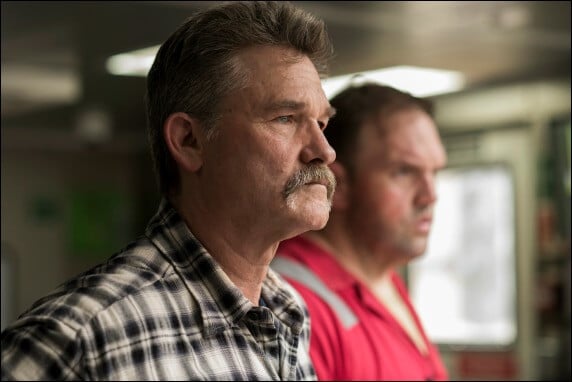 Wahlberg and Russell understand the proper tone the material demands. We know heroism will emerge from the chaos, but it’s critical to see them as potential heroes even when they’re swapping small talk.

Berg’s camera captures the raging power beneath the rig. It pulses and creaks like a living thing, begging to be released. It’s awesome to behold, giving even the quiet early moments a sense of dread most horror movies can’t capture.

DID YOU KNOW: Deepwater Horizon represented a state of the art facility. Built in South Korea, the rig featured a football-sized deck, a gym and a movie theater.

The film’s third act gets bogged down in the disastrous details. Characters scramble for safety, but the sequences lack the grandeur of the best disaster films.

Early reviews have slammed the movie for not playing up the ecological nightmare that ensued. Berg wanted to tell a different, more important story.

“In the middle of all the deserved attention for the oil spill, that heroism has almost been lost. This film is a chance to tell that story,” Berg says in the accompanying press notes.

The waters will heal. The wildlife will come back. Those lives won’t, and “Deepwater Horizon” keeps them foremost in mind all the way through the end credits.

HiT or Miss: “Deepwater Horizon” is a disaster film with thrills and soul.

Director Tim Burton never met a misfit story he didn’t want to direct. So, faced with a gaggle of peculiar lads and lasses, he whips up his best film in ages.

“Miss Peregrine’s Home for Peculiar Children” is a whimsical, bittersweet tale of a teen discovering a world well beyond his own. Burton’s visual snap is ever present, and the story brims with damaged souls seeking to belong.

Burton the storyteller won’t let that happen, though. Once again his film stumbles just when it should be hitting its stride. And an action-packed finale only distracts from that reality.

Asa Butterfield stars as Jake, a teen mourning the loss of his eccentric, but beloved grandfather (Terence Stamp). Grandpa’s passing proved as bizarre as his ramblings. Closure won’t come easily.

Those mysterious circumstances lead Jake and his father (Chris O’Dowd) to visit Wales, the source of grandpa’s unusual tales. Once there, Jake stumbles up the source of the old man’s “fantasies.”

It’s permanently 1943 in the home run by Miss Peregrine (Eva Green). She watches over a group of children who each have otherworldly gifts. They can hover, start fires or chew food with teeth on the back of their head.

As super powers go, that last one is a flat-out bummer.

FAST FACT: “Miss Peregrine” author Ranson Riggs says he created his story out of a love for vintage photographs

Jake is drawn into their cozy circle, a hiccup in time that cushions them from a house razing assault. Do’t ask. He’s also smitten with Emma (Ella Purnell), a beautiful teen who needs lead shoes to keep her grounded.

Their bubbled life is threatened by a group of frightening creatures led by Barron (Samuel L. Jackson). He’s aided by a batch of Hollows, beasts whose invisibility makes them even more destructive.

We’re firmly in Burtonville with “Miss Peregrine.” Dazzling visuals. Swooping creatures aided by some effective 3D technology. Misfits trying to find a sense of community against all odds.

Those tropes never tire. It’s how Burton lines them up that can be maddening. The film’s setup is complex, but Burton and co. manage to tell it in a way that keeps us engaged … for a while.

The film’s villains are far better than the movie itself. Jackson doesn’t show up right away, but when he does he blazes across the screen. And, unlike other recent Jackson outings where the script says, “talk like your 21st century bad-ass persona,” this role is giddy in its evil intentions. 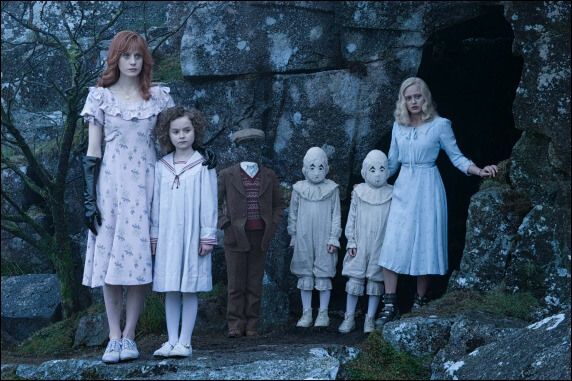 And then you have the Hollers, creatures that look like clowns on stilts morphed into something hideous. They make the PG:13 movie inappropriate for younger viewers.

Based on the novel of the same name by Ransom Riggs, “Miss Peregrine” offers reassuring themes about meeting new friends and taking responsibility for your actions. It’s merely wrapped in an inconsistent story beneath Burton’s best material.

HiT or Miss: Tim Burton fans will cheer his best movie in some time, but everyone else will be frustrated at how “Miss Peregrine’s Home for Peculiar Children” squanders such an engaging premise.