A documentary about Santa Monica’s most famous laundromat employee shows you don’t need money to be happy. All it takes is a dollop of independence and an unflagging will to survive.

“Queen Mimi” doesn’t sugarcoat homelessness. Nor does it paint its subject as beyond reproach. It’s just the most unlikely documentary subject possible, and one worth you getting to know.

Mimi, as she’s known to legions of California denizens, works at a busy laundromat. She folds clothes, cracks wise with customers and dances a jig when the mood strikes.

She’s also in her late 80s but has a teen’s zest for life. And at night, when all the customers have gone home, she pulls up a laundromat chair and goes to sleep.

She’s been homeless on and off for more than 20 years. How she got there is part of the mystery tugging at the documentary’s edges.

First-time filmmaker Yaniv Rokah is Mimi’s friend, a connection that could have watered down the story. Instead, it lets him peek into her personal life. Mimi is stubborn. She’d rather the world see her as her current self, not the lonely young woman broken by a bad marriage. 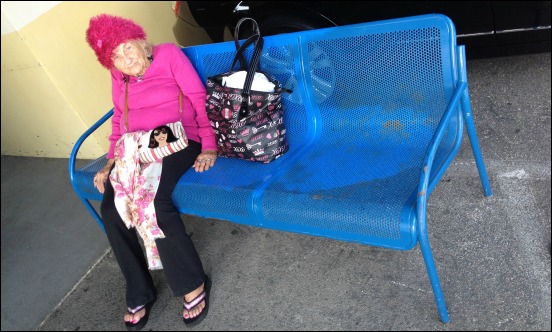 She wasn’t always the lovable eccentric who drew the admiration of stars like Zach Galfiianakis and Renee Zellweger.

Hollywood couldn’t write such a complex soul, at least not convincingly. Mimi is sweet and sassy, but cross her and she’s bark at you like a small dog. She doesn’t complain about her lot in life but manages to wrest favors from almost everyone she meets.

You can see why.

She’s got a big, lopsided grin coupled with a mischievous twinkle in her eye. Who wouldn’t want to help her?

“Queen Mimi” clocks in at just 76 minutes, but even that feels padded at times. The film documents her homeless status in numbing detail, and some of her friends’ observations feel rote by mid-film.

The most surprising subplot involves “The Hangover’s” Galifianakis. He’s known Mimi for years and has a genuine bond with her. Yet he’s self-aware enough to realize how that looks. Here’s a big movie star inviting Mimi to movie premieres, a kitschy move by any stretch.

He also helps secure an apartment for her, squirming as he details his generosity. Could he have done more? And why not sooner? Won’t his fans see this as a publicity stunt rather than genuine kindness?

Mimi’s evolution also points to how women have become culturally empowered over time. She may be broke and homeless, but she lives on her terms. That wasn’t possible for her earlier in life, even if she had all of life’s essentials covered.

“Queen MimI” could have celebrated her homeless status or played up her mercurial nature. Instead, it shows a woman who refuses to buckle when most of us would have done just that.

It’ll make you smile as wide as Mimi does on any given day of the week.

IF YOU LIKE “QUEEN MIMI” … you may enjoy “Surfwise,” the documentary about an obsessed father who made his large family grow up in a beach side trailer.