By being a political affair, “99 Homes” ultimately ends up being a flat one, too.

Inspired by true events, “99 Homes” has an incredible nut of a tale from which to work. Dennis Nash (Andrew Garfield) is a father evicted from his home during the 2008 mortgage crisis along with his son and mother. Nash is out of work … and out of luck.

The man evicting him is a real estate broker representing various banks. Rick Carver (Michael Shannon, pulsing off the screen) is making a killing off of the Depression-like crisis.

Eventually, through a series of strange events, Nash ends up working for Carver. Suddenly, he’s the one evicting people just like him.

The characters and story are all set for a powerful morality play. “99 Homes” lacks the energy to do anything except preach and tell a manipulative story. The film knows who the bad guy is and has no interest in presenting shades of gray.

Shannon’s Rick Carver thrives while others are suffering. However, the movie wants to lay everything on his shoulders. He’s the philandering, stealing capitalist. For a large portion of the movie, he only shows up when the story requires him to be a snake, hissing how heartless he is.

Homeowners are treated with nothing but reverence. And the government? The film serves up a few references to mismanaged government programs. Otherwise, bureaucrats escapes scrutiny even as the government bails out its friends and neighbors, leaving the country it sold false promises to behind.

Every piece of art ultimately ends up with a worldview. The best art poses questions, the right questions, through characters and acts with which we can connect.

The politically charged “99 Homes” has the answers to its own questions before even asking them. It’s part of larger problem impacting filmmaking today. 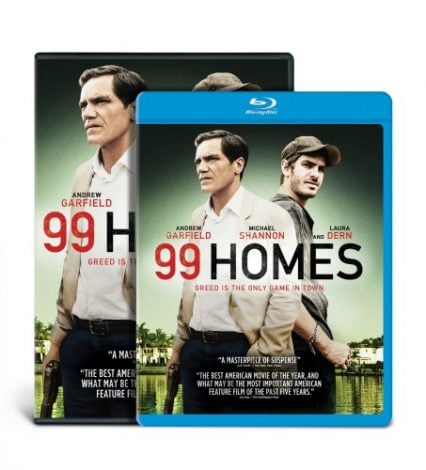 A film doesn’t need to be devoid of politics. Films should be crowded with the politics of human nature, character interactions, inner moralities, misguided authority and more. Art and film have the power to be wonderful connectors, acting as tools for people to empathize and draw new emotion from.

Films like “99 Homes” ignore those notions in favor of its agenda. They choose what facets of a story serve them best. What you end up with is a hollow attempt at something meaningful.

These critiques aren’t connected to any disagreement with the film’s agenda. I agree with a lot of what is said. I’m also saddened by the human suffering only hinted at in this movie in order to throw a softball political point at the audience.

The best parts of “99 Homes” happen when it stops sermonizing and presents hard truths. Carver shares a story about his father midway through the film, and he insists he’s not the bad guy in the crisis. It’s the most honest moment in the film. Suddenly, his character feels like more than just a mouthpiece for what the filmmakers are trying to say.

There’s another scene where Nash is recognized by someone who he evicted. It’s powerful watching the actors play with the fear and implications of the encounter. In those two moments the movie forgets its talking points and shares a powerful story.

On the plus side, Garfield and Shannon are nothing short of brilliant. Each captures their characters down to the smallest details. They both deserved a better script and better film.