Romeo and Juliet had nothing on Nick and Laura.

The couple at the heart of Lou Aguilar’s “Paper Tigers

” is as ideologically diverse as Rachel Maddow and Sean Hannity. And, in Trump’s America, that means love can’t possibly bloom.

Aguilar’s new novel asks that direct question, but that’s not all readers will discover in the book. HiT reached out to Aguilar to learn what inspired “Paper Tigers

,” his thoughts on modern journalism and much more.

HiT: Where did you get the idea of two WaPo reporters from different ideological backgrounds falling for each other? Was there a real life component to this at all?

Aguilar: This is a semi-autobiographical novel, recalling both my journalism debut as a lowly Washington Post copyaide (formerly copyboy) and impassioned romance with a gorgeous patrician radical feminist. Back then, ideological disagreement in a sexual relationship was more cordial, with progressives still treading lightly on their march toward cultural hegemony.

Trump’s election totally discombobulated them, making cross-political love almost a Capulet-Montague affair. That’s when I knew modernizing and embellishing my story could make for a wild romantic comedy.

HiT: The story switches perspectives, so at times you hear conservative points of view and, later, liberal arguments. What was your goal for that element of the novel?

Aguilar: I consciously did something the liberal writers who dominate the arts seldom do – give an oppositely opined character dignity and attractivity. In almost any Hollywood production, a conservative Christian is invariably either a complete idiot, evil pervert or just plain deplorable. Literary fiction is still somewhat more flexible, but with the accelerating trend toward political correctness.

For a battle of the sexes story to work, both lovers have to be equal combatants, as are my protagonists Nick Jarrett and Laura London. Readers may be able to deduce which of the two I agree with more, but they’ll have plenty to admire in the other.

HiT: How did your days at The Washington Post directly influence “Paper Tigers?”

Aguilar: Before the explosion of the internet and cable news, the Washington Post was Mecca to aspiring journalists. It employed bright, ambitious young people like me from all over the country, eager to be basically gophers – sorting mail, answering phones, assisting on the news desks – for a shot at the Post press card.

And even now amidst the rapid decline of newspapers, the Post remains a prestigious media powerhouse, so the book works. The fact that the new interns are still educationally and intellectually above average made my writing about them easier, since I could believably avoid frequent F-bombs, blasphemy and other Millennial norms.

HiT: The fact that your main characters could be in the same room with each other seems miraculous in our divided age. What would you like readers to take away from that essential element of the novel?

Aguilar: Part of the fun, I hope, is that in the workplace environment, controlling temperament is paramount, so one party has to take argumentation to the limit without crossing the line, while the other party has to tolerate political offense without blowing up or melting down. Since both Nick and Laura are, as I mentioned, intellectually formidable, their dueling takes the form of wit and humor, sparked by sexual tension that verges on the widening danger zone.

The question then becomes can chemistry trump ideology in the triggering time of Trump? I hope readers will enjoy the romantic cat and mouse antics, alternately cheering and groaning.

HiT: Are there journalistic lessons to be gleaned from your story? 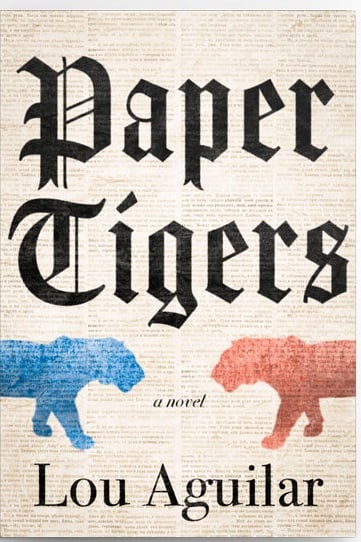 Aguilar: Realistically, cowboy conservative Nick is in the tiniest minority of mainstream journalists, and feminist fatale Laura in the vast majority. Nick starts out trying to be an objective reporter, Laura a more crusading one with her extra running room. It’s not until Nick experiences how much the deck is stacked against him socially that he becomes an aggressive editorialist, which naturally and amusingly raises the friction with Laura.

The journalistic lesson is that you can’t be neutral in a biased medium set on a total progressive victory, but maintain your fire within the range of truth.

HiT: Talk about your inspiration for writing a novel of this kind … and why don’t more conservatives actively engage in the culture?

Aguilar: About eight years ago, like Nick, I made a startling discovery. As a conservative, I am the counterculture now. My work, my art – I was a produced screenwriter – had hit a progressive wall. My scripts began getting rejected for astonishing reasons, such as the hero being too heteronormative and the heroine too sexual. Something had flipped during the Obama presidency, and was increasingly shunning my values and themes.

Rather than tilt at Hollywood windmills, I returned to my first love, literature. My first novel, “Jake for Mayor,” a cute dog story, was well reviewed and received. I was still hesitant to take on the liberal zeitgeist directly with “Paper Tigers”, then I heard Andrew Klavan.

Klavan had become my favorite living American novelist by virtue of three books, his Bishop-Weiss trilogy. He’d also screenwritten a little gem of a movie, “A Shock to the System.”

I had no idea about his political leanings until I heard him on podcasts, eloquently challenging conservatives to get into the arts, but for God’s sake, be entertaining and not bombastic. It was exactly the impetus I needed to write “Paper Tigers”.

HiT: What’s been the most interesting reaction so far to “Paper Tigers?” Did you expect that?

Aguilar: The most rewarding reaction to my novel is high praise from liberal readers who got hooked by the story, romance, comedy and characters. Some couldn’t help liking Nick, even while cursing him as they read.

I didn’t expect that, but I sure worked for it.