A disaster of epic proportions happened at the 89th Academy Awards.

The production team behind “La La Land” took the stage, collected trophies and starting thanking people for “winning” the Best Picture Oscar. In the midst of their celebration pandemonium broke out.

Best Picture presenters Warren Beatty and Faye Dunaway made an error. Once stage hands and officials stepped in we learned “Moonlight” was, in fact, the actual winner.

How this transpired and what took place requires collocation of data and some time-code analysis. Here is how the event played out, in real time.

The first individual to be blamed for the mess was Beatty. Looking at times lost or confused, he made a fumbling presentation. As he is seen opening the envelope he paused numerous times, possibly to build up suspense.

In fact what you see is bewilderment.

The card made no sense to him. He even looks inside the envelope for an additional card, and he eventually passed it off to Dunaway. She is the one who announces the “winner.”

So Dunaway is to blame! Well, maybe not.

The first piece of evidence: a screencap, though blurry, does in fact show Beatty was holding a card that says ACTRESS IN A LEADING ROLE. This would make sense as to why “La La Land” was announced; They were in possession of the wrong card.

Why was he holding the announcement for Best Actress? That had been the penultimate award, presented just prior to this moment. Emma Stone won for her role in “La La Land.”

This would seem to indicate the error was tied directly to that award, and specifically to the presenter. Leonardo DiCaprio is to blame!

It was theorized that DiCaprio was the cause because he must have slipped Beatty the card after Stone gave her speech. He ushered Stone off stage and he was seen holding the card that announced her winning. 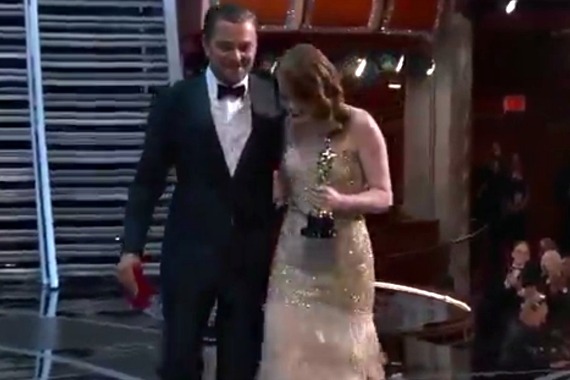 So at some point he must have either handed this card to Beatty, or to a stage hand, who then gave it to the actor. However in her post-ceremony press conference, Stone said this could not have played out since she was in possession of her winning category card.

This means Stone is to blame! She obviously left her card behind, or palmed it off on a stagehand as she left. Except she was seen with the card elsewhere. This is proven as she was photographed backstage with both her Oscar trophy and the card in question.

The official Academy Twitter feed sent out the announcement of “La La Land” winning. This tweet was later deleted and the correct winner, “Moonlight” was announced, about six minutes later.

And the Oscar goes to… pic.twitter.com/i846CnSDAi

So the remaining mystery: how could Stone be holding her winning announcement backstage while Beatty is handed the same card? This is due to a safety redundancy built into the system, by the firm that tabulates the votes and protects the results, Price Waterhouse Cooper (PWC).

Once the votes are submitted by Academy members, PWC tallies the results in each category. Once the winners are determined only two people at PWC know the final results — Brian Cullinan and Martha Ruiz.

They attend the ceremony, arriving separately for contingencies, with independent briefcases. These each carry the full allotment of winning presentation cards.

Ironically, in a quote before the show, Cullinan explained part of the process in presenting the winning cards during the ceremony.

It was at some point in this process where it appears the duplicate Best Actress winning card was mistakenly given to the presenters. Seemingly DiCaprio and Beatty originated from opposite sides of the stage, and this resulted in the duplicate Best Actress card being handed to Beatty in error. Ultimately the company itself ensuring this sort of error does not happen accepted responsibility.

The last question is probably one that may never be answered. Why did it take them so long to determine the correct result, given the entire entourage was allowed to take the stage and start thanking people before the result was corrected?

That could be the subject of a compelling documentary!