“London Has Fallen,” the sequel to 2013’s modest hit “Olympus Has Fallen,” finds Butler back as the toughest Secret Service agent since Clint Eastwood’s Frank Horrigan from “In the Line of Fire.”

He’s got the brawn, the quips and even the buddy — who just so happens to be the Commander-in-Chief.

Neither cares about politically correct sensibilities while saving their own skins. Some film critics may recoil at unabashedly killing the enemy. Audiences will likely find it refreshing. That is, assuming they cover their ears for some God awful dialogue.

Butler’s Mike Banning is about to become a dad, and he’s got a resignation letter all ready on his computer screen. That should give him enough time to bond with his new bundle of joy. Only world events won’t let him hit the “Send” button and make it official.

A terrorist mastermind is watching. And waiting. And so are his minions. If the real terror threat matched what we see in the film, we’d be scurrying to the nearest bomb shelter.

Before you can say, “God Save the Queen,” London has taken a shellacking. Buildings tumble. Security agents fall from hails of gunfire. And only one man can save the U.S. president.

Huh? What about the Brits? 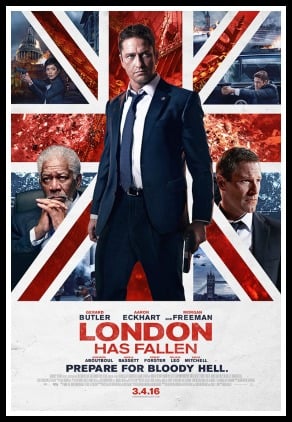 Director Babak Najafi (“Easy Money: Hard to Kill”) orchestrates the mayhem with a nimble touch. The bullets zing, the bad guys crumple to the ground and it all registers with a you-are-there snap. Najafi can do little about the words spoken between the bursts of violence.

No one expects Shakespearean drama or even something out of Aaron Sorkin’s waste basket. What this fine cast is forced to say, including Angela Bassett and Morgan Freeman, is darn near criminal.

“All these guys are terrorist **holes until proven otherwise.”

After about a hundred security breaches lead to the main terror attack, someone cries, “There’s got to be somebody on the inside!”

One of the few funny lines happens early, when Banning describes himself as being made from “bourbon and poor choices.” So naturally they have to use the line again later.

This is B-movie making gussied up to look like a blockbuster. The budget is there, all right, what with the synchronized bombing, some first-rate adrenaline shots and the usual array of landmarks blown up for our pleasure. 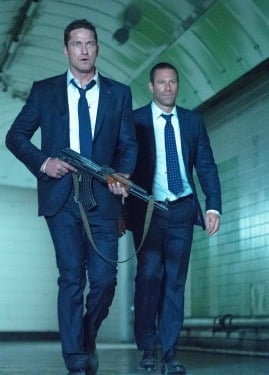 it’s almost tacky to read political messages from such a cloying narrative, but it’s a critical part of the “Fallen” franchise. The sequel beats its chest for the red,white and blue, with British heroes getting second billing (or often much less).

There’s even a message mocking those who blame America’s military might for terrorism.

It’s as if Jack Bauer was still fighting terrorists and cultural observers didn’t clutch their pearls whenever a hero dispatched a terrorist without mercy.

One interesting note. Critics are gang tackling the film for its “islamophobic” tone. And while one of Banning’s line is particularly cruel, “go back to F***anistan,” or something quite like it, the movie never connects terrorism to radical Islam.

No “”Allahu Akbar!” shouts or sequences with terrorists kneeling on prayer rugs. It’s both subversive and politically correct all at once.

No matter. “London Has Fallen” isn’t meant for snooty film critic types. It’s aimed at red meat eaters partial to heroes bending rules and necks to save the day.