How often do films do that?

They were the Butch Cassidy and Sundance Kid of the ’90s, a pair of lovable outlaws who had enough of their male-dominated existence.

Were they right? That may depend where you sit on the feminism scale. But re-watching “Thelma & Louise” shows the film’s spirit remains irresistible and its story endlessly inflammatory.

The two ladies quickly crash a honky-tonk bar where Thelma drinks too much and flirts too hard with a handsome stranger. The man talks Thelma out into the parking lot where he tries to rape her, but a gun-toting Louise spares her friend. But when the man mouths off once too often Louise pulls the trigger in a fit of rage.

The women are instant outlaws, fleeing the scene without so much as a scheme. The law, in the form of a open-hearted detective (Harvey Keitel), quickly picks up their trail. That forces the women to repeatedly rebel just to keep their road trip alive.

“Thelma & Louise” feels like a battle cry against a patriarchal society, but the women are often their own worst enemies. How long should Thelma blame Darryl for her soul-crushing life? Why hasn’t Louise kicked her man (Michael Madsen) to the curb already?

The film works best when the leads play off each other’s differences. Thelma is innocent and unsure, while Louise will try anything necessary to survive. Sarandon and Davis rip into the roles, revealing both the women’s inner strength and the insecurities fueling their road rage.

Director Ridley Scott of “Alien” and “Gladiator” fame seemed an odd choice to helm such a project. But Scott’s eye for the details of small town life and ability to capture middle America’s glorious landscapes gives the film texture and social context. 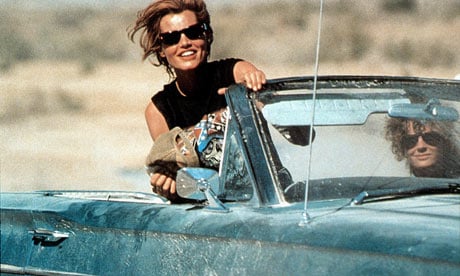 Brad Pitt appears mid-film to play yet another man willing to take advantage of our heroines. Pitt’s washboard abs and aw, shucks smile turn a small role into a star-making one, and his scorching love scene with Thelma adds a blast of sensuality.

“Thelma & Louise” paints most of the men on screen as cruel, callous or just plain mean. When the women decide to teach a trucker a lesson late in the film it feels like screenwriter Callie Khouri, who won an Oscar for her acerbic script, is piling on the empowerment a mite too thick. But in an age when screenwriter Aaron Sorkin can litter a great movie like “The Social Network” with cruel woman it’s hard to jump up on a high horse about “Thelma & Louise’s” imbalances.