Beloved brands sell at the cineplex. Tentpole movies are the new coin of the realm. And it’s been long enough for many to forget the franchise’s last two mediocre installments, a charitable assessment.

But oh, what a rush the original “Jurassic Park” proved to be. Watching it now, roughly 22 years later, reminds us why any studio would consider going back for more.

Yet for all of creator Michael Crichton’s ingenuity it’s Steven Spielberg’s pop culture wizardry that sells this “Park.” He retains a child-like glee in making us jump while giving flesh and blood characters the fright of their lives.

A pair of scientists (Sam Neill, Laura Dern) head to a mysterious island where their expertise will be 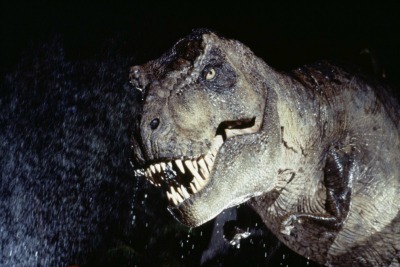 All Attenborough’s character needs is a scientific thumbs up, and the assurance of his jittery investors, that the park is ready to open.

Not so fast. Add some timeless greed courtesy of our old frenemy Newman (Wayne Knight), and the supposedly safe park becomes the scariest place on earth.

“Jurassic Park” marked the moment when Hollywood could create a perfectly convincing dinosaur. No more stop-motion theatrics or other tinny effects. Spielberg makes that movie magic count, delivering scene after scene of “can you top this” theatrics?

Not enough to see a T-Rex’s pupil dilate next to our heroes? Buckle up. Spielberg’s just warming up.

Jeff Goldblum steals moment after moment as a “chaos theory” expert whose job is to debunk every reason for Jurassic Park to exist in the first place. It’s vintage Goldblum – the fast talking, the sly charisma and the irreverent tone are all there.

It’s Neill’s heroism that sells the film from a character point of view. Spielberg delights in this sweeping close-ups that could only be dubbed Spielberg-Vision. But Neill channels both fear and courage as a man seeing his life’s work spring to life before his stunned eyes.

It’s just one more sense of wonder to throw atop the pile.

Who knows if “Jurassic World” will come close to matching the source material? Brand reboots no longer demand our snickers. Just consider how darn good the new “Apes” franchise is proving to be.

Still, movie goers will enter “Jurassic World” with their arms folded, waiting to see if the film can deliver a fraction of the chills we felt back in 1993.

DID YOU KNOW: The sound team behind “Jurassic Park” used the noise tortoises make during intercourse to create the raptor’s unique barking sounds.