It’s the lesson learned the hard way with “The Lone Ranger.” If today’s teens don’t know the brand, and the movie isn’t the second coming of “Star Wars,” chances are they’ll spend their money elsewhere.

Remind them why the property matters, and you’ve got a new franchise on your hands.

The suits at Warner Bros. have empty hands with “The Legend of Tarzan.”

This isn’t a “Lone Ranger”-sized misfire. From an eye candy perspective alone, pairing Alexander Skarsgard and Margot Robbie is enough to justify the ticket price. What’s missing is the magic, the reason the character endures into the 21st century.

We see why in fits and starts. It’s not enough to justify all the protein shakes Skarsgard likely quaffed for the role.

“Tarzan” introduces us to a more civilized Lord of the Jungle. Skarsgard’s John Clayton is happily married to Jane (Robbie) as the story opens. Sure, he was raised by apes, but he’s since learned hat to do with his pinkie while sipping tea.

Before you can scream Tarzan’s signature yelp, John is heading home again. And, sooner or later, he’s gonna lose his shirt.

Only Rom and his minions, including an African warrior (Djimon Hounsou) with a grudge against “Tarzan,” are waiting for him.

Slather on a heaping helping of White Guilt (complete with our treatment of Native Americans for good measure), and your story wheels start to grind. It’s not an inspired start, by any stretch. Still, the story offers enough excuses  to bring Tarzan back to cinemas.

Only you’ll soon wonder what the fuss is all about.

Lord of the Yawns

Skarsgard brings a restrained posture to Tarzan. Sure he’s got the physical notes down cold, but where’s the sense of wonder? His Tarzan is constantly overshadowed by both Robbie and Jackson. The latter turns in yet another anachronistic performance. It’s like he walked off of “The Hateful Eight’s” set and headed straight for “Tarzan’s” jungle gym.

Does Jackson have his own screenwriter on staff who pens his thoroughly modern banter? You have expect him to make a meta reference to “Snakes on a Plane.” 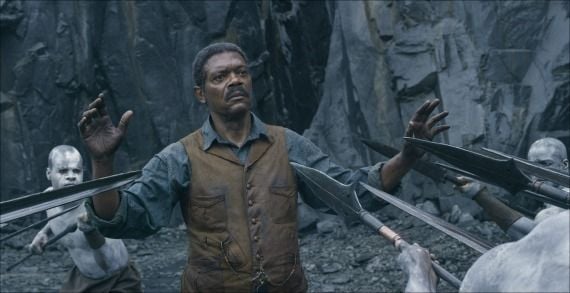 It’s dizzying how many ways director David Yates (the “Harry Potter” series) could have taken this new Tarzan. What about the inner conflict between modern mores and his primitive instincts? Could his primitive past prevent him from truly connecting with Jane?

Or does she admire the animal lurking within?

Is he happier swinging from trees or savoring a home-cooked meal with his love?

Waltzing Through the Film

Or consider a far less complicated solution. Give Waltz a character worthy of a two-time Oscar winner and sic him on the Lord of the Jungle.

Waltz is such a fine actor Hollywood doesn’t bother to pen anything intriguing for him to say. And can we steer him clear of generic villain roles for a good decade?

His best scene finds him squabbling with Jane over an elegant dinner. Here’s betting the minor details shown in the moment came from the actor’s imagination. Just a hunch. Beyond that, there isn’t much to his character besides a crisp linen suit.

“Tarzan” soars mostly when the film embraces its pulp roots. The film has a better sense of humor than some might expect. Only Tarzan acts like the guy at a party who needs the punch line explained to him.

And what about Jane? Robbie’s Jane has all the moxie of Jennifer Lawrence complaining about her million dollar salary to fawning reporters. The movie takes great pains to show she’s a modern heroine. Who cares if the story is set in the 1890s. We’ve got social justice warriors to fend off.

This Jane is no damsel in distress, as she warns Waltz’s character before hocking a loogie in his face. Of course, she’s summarily tied up and spends much of the movie bound.

We get to know the famous Tarzan/Jane courtship via flashbacks, but the narrative device ends up feeling tame, routinely dull. Heck, anytime “Tarzan” tries to be serious the movie screeches to a dramatic halt.

Only when Skarsgard loses his shirt and makes his animal chums do his bidding does “Tarzan” fulfill its summer movie potential. In those blissful moments the movie turns into yet another superhero romp.

Tarzan swings on vines, which never break, like a teen with radioactive spider blood in him. He endures a thrashing by a gorilla as if his bones were made of Adamantium.

All that’s missing is the cape and the secret identity.

It’s hard to imagine those new to the Tarzan legend leaving the theater to uncover previous stories featuring our bare-chested hero. Chances are they’ll go home and see if a new “Suicide Squad” trailer dropped over the last 24 hours.

Steven Spielberg is back making movies for the kid lurking within us. And he’s leaning on a script by the woman who penned his 1982 classic “E.T.”

The new film comes from the imagination of Roald Dahl, the mind behind “Charlie and the Chocolate Factory” and many other delights. His stories are “for children” – just don’t tell adults grinning from ear to ear about that distinction.

“The BFG” may have its pleasures on the printed page. It’s hard to imagine any adult slogging through Spielberg’s adaptation and craving a second or third helping.

The delightful Ruby Barnhill stars as Sophie, an orphan captured by a giant as the story opens. Only this giant isn’t interested in swallowing her whole. He’s a Big Friendly Giant, mind you, sprung to life with CGI and motion capture of new Oscar winner Mark Rylance.

All he wants is to keep her away from his more carnivorous peers. 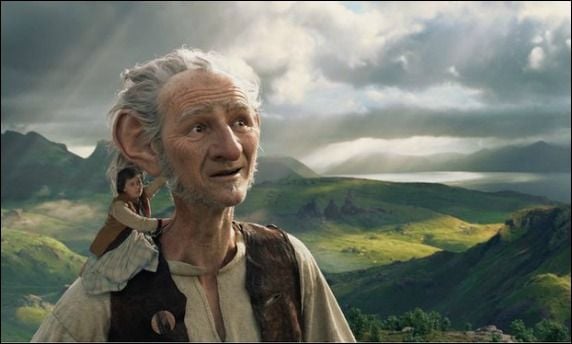 Those giants are meaner, and more eager to swallow little girls like gumdrops. Can our BFG protect Sophie, while she teaches him a lesson or two about believing in yourself?

Spielberg, ever a master at using technology to enhance the narrative, works in reverse here. There’s so much CGI splendor on display, from the giants themselves to the whirring flashes representing dreams.

There’s nothing “wrong” with any of it … but when the story is this threadbare, the pace so sluggish, you’re left to marvel with those admittedly stellar effects.

Young Barnill is a charmer, with a droll sense of humor barely tapped by the script. The late Melissa Mathison’s screenplay can’t manufacture enough tension to make this giant tale a hoot. What she does is supercharge the dialogue with silly words like snozzcumbers (fruit) and whizzpoppers (flatulence).

Rylance, who gives voice and shape to the titular giant, shows what happens when technology and talent collide. Oh, what he could evoke with a more compelling yarn.

His oddball language and endearing tics make him as “real” as any actor. And he’s a damaged soul, something we simply don’t appreciate between the goody slang and giant skirmishes.

FAST FACT: Mark Rylance earned an Oscar for his work in 2015’s “Bridge of Spies.” Previously, he scored two Tony Awards – one for “Boeing Boeing,” the other for “Jerusalem.”

“The BFG” improves slightly as the story moseys to its conclusion. A sequence involving the Queen of England captures the story’s potential, but only for a flash. The humor is juvenile, unsophisticated, exactly the opposite of Dahl’s best tales.

It’s not always fair to compare children’s films to the Pixar canon. But when you stack up “The BFG” next to that studio’s top shelf stuff, it’s hardly a fair fight.

One can dissect another Spielberg tale involving missing parents, but that investigation can’t move beyond the basics.

Once upon a time, Spielberg and Mathison captured what it felt like to be a child. Lonely. Afraid. Full of hope and confusion. And the story happened to have a space creature as its star.

Now, with massive technology behind him, the Oscar winner can’t measure up to his own legacy. But you might dream about his better films while snoring gently through “The BFG.”