“Sons of Liberty” is not just playing fast and loose with reality but completely distorting basic history.

The six-hour miniseries’ main character, Sam Adams (Ben Barnes), who was in his 40s during the time period portrayed, wasn’t an Olympic athlete with model good looks. However, the series shows him as this 30-year-old badass jumping from roof to roof to escape the British.

In real life, Adams was a twice-married Harvard graduate. In this show, he is a single hunk who hangs out at pubs with a rogue group (hmm, Sam Adams Brewery was a sponsor of the miniseries). We don’t know why he is so troubled by the mean British between tankards of ale, but hey, just go with it.

The brooding Barnes’ Sam Adams is always where the action is. He is shown clubbing a British soldier during the Boston Massacre in retaliation for the death of a protester, presumably hero Crispus Attucks, who never gets a mention.

Sam’s cousin and future president, John Adams (Henry Thomas), barely has a part in the miniseries.  Never is he shown as the lawyer who defended the British soldiers accused of murder after the Boston Massacre.

In another scene, heroic Sam defiantly breaks open crates in presumably the Boston Tea Party. Again, we don’t know why he and his gang, led by Paul Revere (Michael Raymond-James) are protesting.  Was it because of the Stamp Act? Townshend Acts? No taxation without representation? Who cares? The actors are handsome and the action is thick. 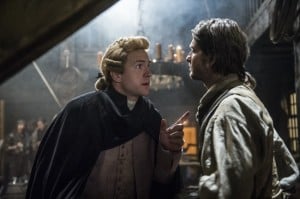 The miniseries indicates that the too-cool-for-school Adams barely tolerated a foppish, and rich, John Hancock (Rafe Spall). Hancock bankrolled Sam’s nefarious activities against the British after his house was taken over by the evil British (which, apparently really happened, but after Hancock abandoned it when the war started).

Just as in 2000’s “The Patriot,” screenwriters Stephen David and David White portray the British as nothing short of pure evil. In particular, Gen. Thomas Gage (Marton Csokas) is Hitler reincarnate.

“Sons of Liberty’s” Gage quartered troops in private homes, arrested innocent people, flogged a poor citizen and even personally executed Dr. Joseph Warren at the Battle of Bunker Hill (apparently in retaliation for having an affair with his wife who passed him secrets about the rebel’s movements). Hard-to-believe stuff.

In reality, Gage actually spent many years in North America, rarely returning to England.  He even married an American woman from New Jersey, Margaret Kemble Gage (Emily Barrington). The toxic relationship with George Washington (Jason O’Mara) is described in “Sons,” but in reality, the two had served in the French and Indian War together and were friends until the war started.

Despite all the inaccuracies, the film is nicely directed by Kari Skogland, the acting is solid and the action really draws you in. Unfortunately, it’s all a smokescreen.

There is an uncomfortable phoniness surrounding the whole production. Most of the actors are not Americans (which seems to be prevalent in many movies these days). Old Boston is some sort of set in Romania. 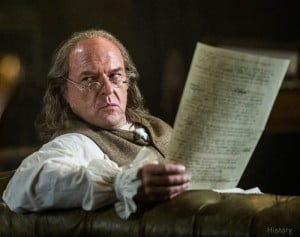 Even Benjamin Franklin (“Breaking Bad” alum Dean Norris) utters the expression “batshit crazy” when referring to an ill-conceived plan (was this language even in use in the 18th Century?).

Maybe it’s more sinister, part of the dumbing down, and marginalization of history as evidenced by the History Channel’s recent lack of focus on its primary subject.

One example is the channel’s “Pawn Stars” marathon on June 6, 2014, the 70th anniversary of World War II D-Day landings.

Why am I getting spun up about this work of “historical fiction?” Some folks will say, ‘hey, don’t get all mad, it’s only a TV show.’ However, there was a study done years ago, before social media and mobile devices, indicating most young people received their education about the Vietnam War from the movies.

And, simply put, a cool and handsome Sam Adams jumping over buildings apparently is a bigger draw than a middle-aged stiff putting together a coalition and drafting legislation.