I can get swept away by the choreography and put up with a lot of silliness for a good dance film. After all, some of the best ones are fundamentally very silly. But something about them carries us along and makes us forget there isn’t much there there.

“High Strung” is a dance film with good intentions, but ultimately it falls short. The lack of “there there” is too hard to ignore.

Although it seems to be a labor of love by screenwriters Michael and Janeen Damian, the script leaves a lot to be desired. Ballerina girl moves to the big city, meets violin-playing boy with hip-hop friends and they enter a “strings and dance” contest amidst mild personal dramas.

The dancers are great, the choreography by Dave Scott (the “Step Up” franchise) is mostly really good, and the dancing is fun. Still, that dancing is framed by preposterous plot elements designed to create wacky dance-offs. The rest of the story is not funny enough to pull it off the way the best classic dance movies do.

The story straddles the line between drama and zany dance energy. It just doesn’t go far enough in either direction to have the cheese factor of “Flashdance” or “Dirty Dancing.” Nor does it pack the twisty darkness of “Black Swan,” which had that extra something that made it (surprisingly) believable. 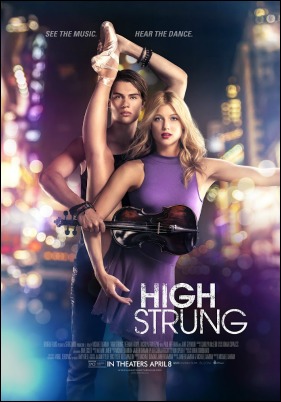 “High Strung” takes itself way too seriously, and although the dance energy kept me involved until the end, it doesn’t have the script to carry off the serious moments without feeling forced.

In general, the choreography is a strength of this movie despite some of the weird and awkward settings. Consider the ridiculous dance battles in the subway and at a fancy benefit party. Or the madcap troupe of hip hop dancers that spontaneously adopt the male lead, Johnnie (Nicholas Galitzine). They introduce themselves by taking solos in their communal living room.

The dancers and their moves are full of energy and interesting shapes, and the musicality of the dance is strong. The ballet choreography isn’t very exciting, though—which is especially disappointing in the final contest number that combines the hip hop dancers with the ballerina.

It’s a little too straightforward and classical “step” based, and doesn’t take enough advantage of the physical dynamics that the female lead, Ruby (professional ballerina Keenan Kampa), should be capable of carrying off. 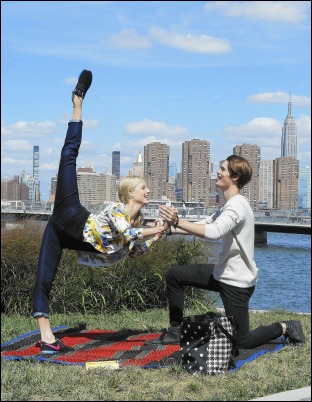 Kampa’s performance, however, is another strength of the movie. She is the most believable character, bringing both a natural style and real acting talent. Her professional ballet training lend credibility to the film.

Not even that authenticity is enough to carry the rest of “High Strung” on its shoulders.

It was hard to make it all the way through, and I only stuck with it because of the high energy montage towards the end (in which they are rehearsing their competition entry).

That final performance was just short of awesome. It lacked the aforementioned potential for modern dynamics in the ballet choreography.

The cringe-worthy characters and shaky plot kept breaking the threads needed to suspend our disbelief. If you’re trying to find your next favorite dance movie, you should probably look elsewhere. Better to go back to the classics like “The Turning Point” for the real deal.

Laurie Parker is a former ballet dancer and performer with Classical Ballet Academy of Minnesota, although currently her performing is mostly in front of research audiences and in the classroom as an associate professor of Biochemistry at the University of Minnesota. She stays in touch with the dance world as a member of the Ballet Minnesota Board of Directors, coordinating technology and media administration.