The indie thriller gives us a pair of monsters who delight in the still image, the frozen moments that capture a victim’s fear.

And that’s where the film’s ingenuity abruptly ends.

“Photographs” may have the late, great Wes Craven’s name attached as an executive producer. It still ends up being yet another genre exercise stuffed with reprehensible characters – both heroes and villains.

Small town dweller Colleen (Claudia Lee) is being stalked by someone placing grisly photographs where only she can see them. The local police refuse to help her, embodied by a comically inept Mitch Pileggi.

A famous photographer (Kal Penn) hears about those pictures online, and he’s surprised to learn the images recall some of his more famous portraits. So he jets from L.A. to Colleen’s South Dakota hamlet – which is also his home town – for a new photo shoot. And he’s bringing his clingy gal-pal and some vapid models along with him. 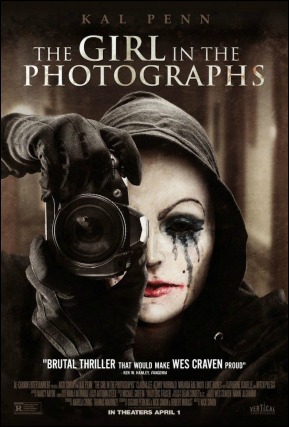 That gives the fiends behind the photographs plenty of fresh meat. They don’t just take lurid photographs. They make them a reality in the most punishing ways possible.

“Photographs” opens with a few generic, but genuinely creepy, visuals. Director Nick Simon stages one “photography session” with brutal efficiency. The story slinks downhill from there, until we’re left with a generic slasher tale with little to recommend it.

Gene Hackman could play a jerk so well that you couldn’t help loving him. Penn can’t pull of the same feat, even if he’s given the film’s few sharp lines.

At least Penn leaves an impression, albeit one you’ll want to rinse from memory. The rest of the cast delivers bland archetypes aching to meet their maker.

Lee has a sweet, open face, but her character never comes together as a potential “Final Girl.” She’s restless and capable of blazing her own trail. Yet she’s stuck with a domineering beau who exists solely to add to the film’s body count.

Spoiler alert? If you can’t see that coming, then this may be your first horror movie experience.

The film’s villains are suitably creepy, given bleached white masks that could be iconic had the movie packed better thrills. Their motivations remain murky, one of many missed opportunities haunting the production.

The third act ramps up the violence, and the FX behind the kills packs an old-school wallop. What’s missing is both tension and consequences. Even the most sympathetic characters, including a hopelessly banal love interest (“Footloose’s” Kenny Wormald) can’t rouse our sympathies.

“The Girl in the Photographs” makes the tragic mistake of raising our expectations in its first few moments. It’s pure slasher shock gussied up by noble intentions.