“I can see where it’s going, and you’re not going to like it,” the friend told Meier.

The co-host of popular shows like Chicago’s “Steve & Garry” and “Roe & Garry” wasn’t ready to bolt at the time. Today, he isn’t looking back after officially joining the podcast revolution in March.

“I’m so happy I did,” Meier says of the transition to podcasting. “You can do the show anywhere, just pick up your stuff and go and explore. That doesn’t happen in radio. That’s what I like to do.” 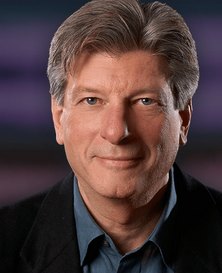 “The Garry Meier Show” doesn’t reinvent the veteran talker’s wheel. It’s still the same snappy banter, along with former WGN news anchor Leslie Keiling hitting the headlines. Now, though, Meier can take the show wherever he pleases, covering topics that speak to him … and his loyal fans.

“Radio enjoyed a great run for a lot of years,” he says, adding too few stations are willing to evolve with the times.

“With podcasts, you are getting uninterrupted conversation, whereas radio listening has been following the same format for at least 50 years,” he says.

“The Garry Meier Show” offers three free episodes each week. Those seeking five shows plus exclusive interviews and bonus content can pay $8.99 a month for the full subscription service.

“After I fired off that first week of shows I had the same adrenaline rush that I had after the first week I was ever on the radio,” he says. That doesn’t mean he’s radically altering his approach …. or his choice of topics.

“I’m using the same mindset I used on radio. If I feel it in my gut I go with it,” he says.

FAST FACT Garry Meier and Steve Dahl were inducted into the National Radio Hall of Fame in 2013 for their long-running show.

That typically doesn’t include politics, even during the current election cycle. Leave that to the Becks, Limbaughs and Hannitys.

“I usually avoid politics altogether. You start waving the donkey or the elephant, and half the audience will skedaddle. Politics is just a freaking irritant at this point,” he says. Those burning to know what he thinks of Donald Trump’s kerfuffle with the Gold Star family, though, can find out more on his blog.

It’s still the exception to his broadcasting rule.

“No one cares what my political leanings are and that’s the way it should be,” he says in his latest blog post.

“I like talking about everything else out there, and there’s plenty to cover,” he says.

Take a doomed Coca-Cola ad accused of sexism. Or the latest marijuana headlines. How could a talker ever run out of topics in 2016?

Meier started his podcast by interviewing the self-proclaimed King of All Media. SiriusXM’s Howard Stern was Meier’s first guest choice. Yes, the same Stern who famously battled radio peers like The Greaseman for decades agreed to open up to Meier.

“We started our careers around the same time and shared some parallels along the way, especially with the FCC witch hunt,” he says of Stern, who appears on the third and fourth podcast of his new show. “He and I come from an era that saw a lot of growth and then a lot of change in radio, so there is a common ground there.”

Listeners may be shocked to hear a different side of the man responsible for Lesbian Dial-a-Date.

“Howard is a master at his craft, and I have found that he also is one of the kindest, most genuine people I have met in this industry,” he says.

As a podcaster, Meier is no longer bound by FCC restrictions. He still doesn’t indulge in the kind of banter that made Stern famous. He may have been bawdier during his “Steve & Garry” days, but that’s not where he’s at today. Being authentic is part of the broadcaster’s appeal.

So what does Meier think can help radio prosper in the face of the podcast competition?

“Well, probably half of [radio executives] should leave, that would be a good start. It is a bit sad to see the damage that was done to radio by certain people in management that really have no concept of how to grow and run a station,” he says. “There are a few good people, but most of them left because they couldn’t take it anymore.”

Meier isn’t ready to coast now that he’s established himself in the podcasting world. It still takes effort to let listeners know he’s on a new format.

His fans can expect more interviews on the podcast and phone calls to spice up the programming. Podcasting remains a dynamic medium, and Meier has little interest in the status quo.

“I will always be a work in progress and that’s fine with me,” he says. “I feel energized and excited about all of the new technology and where that is headed.”