Granted, the most eagerly awaited sequel of the modern era isn’t perfect. For all the heart and hustle poured into each frame there are glaring problems, particularly the sense we’re watching a remake of the 1977 original.

Once you look past the call backs, shout outs and other direct nods to the fan base, “The Force Awakens” simply swipes story elements whole from “A New Hope” that make this ripping yarn seem … stale.

And whenever our old friend Han Solo is on screen, there’s less need for the younger stars tasked with continuing a franchise paused by creator George Lucas.

Star Wars: The Force Awakens Trailer (Official)
Luke Skywalker is missing, reads the film’s opening scrawl. Without him, the forces of darkness now known as the First Order could conquer the galaxy. Only a map deposited in the cutest droid this side of R2D2, BB-8, shows where the Jedi Knight is hiding. He may be  the only one who can thwart the biggest threat to peace since Darth Vader.

That’s all you need to know going in to “The Force Awakens” given director J.J. Abrams’ understandable mania for secrecy. The film introduces us to new heroes who instantly register, unlike the characters of the deservedly derided prequels.

Young Finn (John Boyega, “Attack the Block”) was programmed to be a loyal Stormtrooper, but one whiff of their soul-killing work and he decides to defect. Rey (Daisy Ridley) gets by scavenging spare parts on her native Jakku, little knowing she is destined to play a role in the new rebellion.

“The Force Awakens” isn’t a soulless space saga. Rey and Finn’s meeting is fate on steroids, but how they react to it connects directly to the “Star Wars” mainframe. They’re heroes even if they don’t know it yet. Abrams captures that evolution with a firm sense of good vs. evil, themes that marked the original trilogy. There’s no reason these two should be anything but afterthoughts in a much larger battle. They simply refuse to live down to those expectations.

“The Force Awakens” offers a thrilling first act, slowly integrating the saga’s new stars with Solo (Harrison Ford, as feisty as ever), Chewbacca (Peter Mayhew) and even Princess Leia (Carrie Fisher, given an emaciated role that feels like a nostalgic cameo at best).

The movie’s screenplay, credited to longtime “Star Wars” scribe Lawrence Kasdan, Abrams and “Toy Story 3’s” Michael Arndt, delivers the comic relief fans will be quoting well into 2016 and beyond. 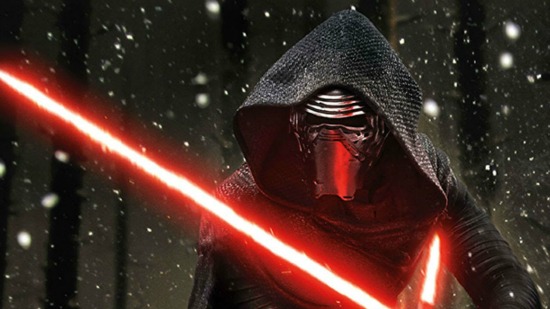 No one could topple Darth Vader in our collective memory banks, so the “Force Awakens” villain doesn’t directly try. Adam Driver (“Girls”) delivers a new menace in Kylo Ren, a petulant foe who can’t control his anger issues.

The sequel eventually drops us back in another killer space station (don’t call it a Death Star!) as Solo and friends scramble to save a heroine. Meanwhile, the rebel fleet tries to take the station out on its perimeter. Did we mention a “new” cantina sequence filled with the usual array of “scum and villainy?”

Sound familiar? It should.

The sequences serve up a sense that the whole enterprise was, perhaps, a $4 billion overstatement. Yes, it’s thrilling to see the old gang again, but why bother with the reunion just to restate the same ol’ story?

Delivering the sequel with practical FX proved a masterstroke. Abrams’ hunch that doing so would connect with the old with the new wasn’t a gimmick. “The Force Awakens” has a tactile quality that leaps off the screen, a refreshing antidote to today’s digital maelstrom. 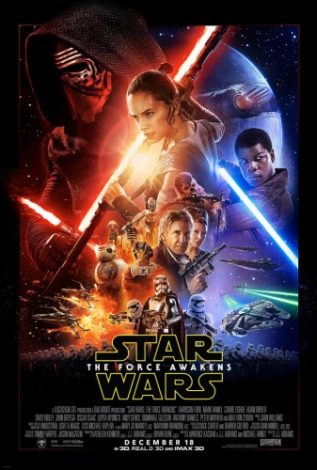 Perhaps Episode VIII will chart a new direction for the franchise, with “The Force Awakens” reassuring the faithful the saga is in safe hands now. That’s the fan in this critic talking, nay shouting, to drown out the film’s expectations.

Our heroes offer far more diverse faces than the original trilogy. And there’s a feminist nudge to Finn’s meeting with Rey, who keeps insisting she doesn’t need anyone to hold her hand when the First Order’s goons start chasing her.

Those moments feel as organic as could be expected, never taking us out of the story entirely.

Boyega and Ridley are good enough to meet the cultural expectations of the rebooted franchise. So, too, is Oscar Isaac as ace pilot Poe Dameron, if only he had more screen time.

“Star Wars: The Force Awakens,” for all its flaws, manages to erase the bitter aftertaste of Lucas’ prequels and prep us for a new generation of “Star Wars” stories. That’s as realistic a victory as audiences could expect given the galaxy of hype.