” takes us to 1980 when political correctness didn’t stop college students from doing, or saying, whatever they pleased. 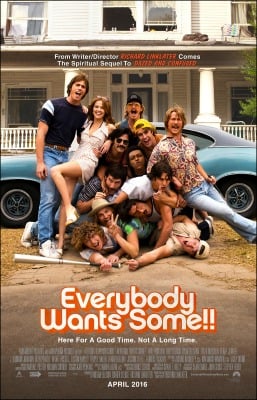 No safe zones or protests over people speaking in the college square. And that felt refreshing to co-star Wyatt Russell.

“I wish people would speak a little more openly now,” says Russell, who plays the enigmatic Willoughby in the film. “We’ve reached a point in our culture where things can be so politically correct because you don’t want to do anything wrong that can be caught on video.”

Saying the wrong thing isn’t the end of the world, Russell argues.

“If you’re wrong about something, that’s OK. Somebody will tell you and have that conversation. To just not say it is worse, I think,” he says. “What was fun about the time is that people were maybe wrong about some of their social views, but they were honest. Part of that weirdly comes through in the movie … it’s not right, but that’s the way it was.”

“Everybody Wants Some!!” captures plenty of un-PC high jinks, but it’s all about recreating a time and place as only director Richard Linklater of “Boyhood [Blu-ray]

Everybody Wants Some!! - Trailer

The film follows a group of college baseball players on their first day on campus. Classes haven’t begun yet, which gives them time to flirt with co-eds and establish that critical pecking order among friends.

Audiences must believe the cast are truly chummy to swallow the story whole. To foster that relationship, Russell and his fellow actors gathered before the cameras rolled to bond on Linklater’s Texas property.

“It’s really weird the amount of chemistry that existed immediately with this gang,” says Glen Powell who plays ladies magnet Finnegan. The actors played skee ball and ping pong in between “tearing apart the script and putting it back together.”

Linklater also demanded the actors embrace the period swagger the characters would display.

“In this day and age when you go out everyone is wearing a different version of the same thing,” Powell says. “Back then, there was like ‘peacocking’ … what you wore, how you danced, what you listened to, it was a statement. It’s a lost art.”

And yet despite the lack of smart phones, texting and Tinder, college students circa 1980 were very similar to how they are today.

“What Rick wanted to get across is, the more things change, the more things stayed the same,” Russell says. The actor, a former professional hockey player, recalls how he and his college buds would gather to watch TV just like they do in the film.

In Russell’s case, the show in question was MTV’s “The Hills”

A hint of political correctness did seep into Linklater’s set. J. Quinton Johnson, who plays Dale in the film, says some footage didn’t make the final cut for a reason.

“If that would have stayed, it becomes a completely different film. It loses a little bit of credibility,” Johnson says.

The original “Dazed” was a low-budget film which hardly lit the box office on fire. Yet it swiftly earned cult movie status and became early career milestones for stars like Matthew McConaughey, Milla Jovovich and Ben Affleck.

Could history repeat itself with “Everybody Wants Some!!” and its youthful cast?

Johnson, slated to appear in the TV remake of “Dirty Dancing,” dropped out of the University of Texas to appear in the film. So he knows what it’s like to dream of stardom while sitting in a college classroom.

“For me, I’m going through that transition. Am I really here? I was just there. It’s kind of scary and daunting,” Johnson says, ultimately putting his trust in the film’s writer/director. “Rick wouldn’t have plucked me out if he didn’t see something ready [in me].”

DID YOU KNOW: Glen Powell was cast in Richard Linklater’s “Fast Food Nation” but broke his arm just before production began. Linklater kept him on the project, saying it made him look more like an authentic high schooler.

Russell, whose parents are Kurt Russell and Goldie Hawn, views the next potential career step with a healthy sense of proportion.

“It’s good to try and not get caught up in any of it. There’s no controlling any of it,” says Russell who recently wrapped “La La Land” with Emma Stone and Ryan Gosling. “I’m taking a Zen approach … I rarely get super excited about it. Most of it is a fleeting moment.”

No matter what happens next, he’ll have a Linklater project to call his own.

“I’ll always be able to go back and watch that piece of my life and remember how great it was,” Russell says.