“Disturbing the Peace” offers hope that the Israeli-Palestinian conflict might come to an end in our lifetimes. The documentary follows an unlikely peace movement comprised of both entrenched groups. Many members were once on the front lines, eager to draw blood from their opponents.

Today, they crave a peace that’s long overdue. That’s a welcome refrain even if the movie leans in a similar direction to the group in question.

“Disturbing the Peace” shares some horrifying personal stories from both Israelis and Palestinians. Some have watched family members killed by their opponents. Others lusted after the weapons they prayed could smite their enemies.

“The first chance I had to throw stones, I took it,” recalls one adult Palestinian about his childhood.

Back and forth the narrative goes, until you wonder how peace could ever be conceivable. The film’s recreations are haunting, as are the unflinching videos featuring bloody men, women and children ravaged by the ongoing war.

Slowly, in beautifully articulated interviews, the subjects detail the moments when their transformation began. The cycle of violence they once embraced starts losing its appeal. Do they really want their children, and their children’s children, to keep fighting these same battles? 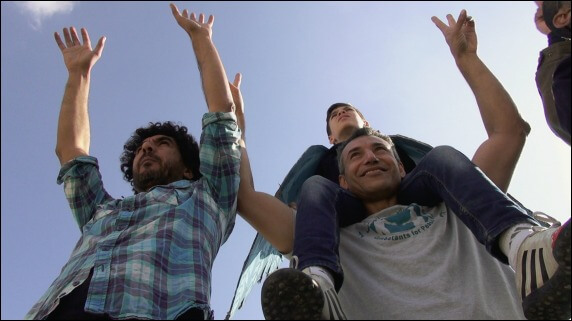 We’re getting to know Combatants for Peace, a group comprised of Israelis and Palestinians fed up with the bloodshed. They banded together to show their fellow countrymen that there is another way forward. It’s one that doesn’t include washing blood from nightclub floors or burying children in front of their grieving parents.

“Peace” strains for balance from the opening interview, far more than most documentaries. Directors Stephen Apkon and Andrew Young aren’t eager to place blame on one side or the other. It’s about reconciliation, not revenge.

So why do these “combatants,” and the film’s directors, focus so heavily on the Occupation and the Israeli soldiers enforcing the rules? Where are the Palestinian leaders who should be working toward peace, not more war?

Some Israeli citizens view these “Combatants” as traitors, siding with the enemy while attacking their country’s defensive posture. Why don’t we see more Palestinians struggling to makes sense of their leaders’ actions?

The film’s second half lacks the moral urgency of those initial interviews. We also don’t see any heated fights between the Combatants, either. Don’t their exchanges occasionally get emotional? Given their history and the continuing bloodshed, it seems unlikely that flareups aren’t common.

And then there’s an exchange between one soft-spoken Palestinian and his wife about the group’s mission. It’s a back and forth volley that feels both muted and, well, planned. Was this truly a fly on the wall moment?

Earlier in the film we see an ingenious blend of dramatic recreations and archival footage. The subsequent footage feels far more perfunctory … and less engaging.

The best documentaries feel like we’re spying on life sans filter. Too often “Disturbing the Peace” plays out in a predictable fashion, particularly with the editing choices.

That doesn’t mean the movie isn’t important, even hopeful. Any movie showcasing men and women turning away from entrenched violence deserves a platform … and applause.

HiT or Miss: “Disturbing the Peace” packs a powerful message, but it’s diluted by an imbalanced look at who fuels the Middle East hate.