His vow to become a published author was different. He refused to let that die.

Gainor, the Vice President of Business/Culture for the Media Research Center, fulfilled that promise by contributing to “We Were Heroes: A Super-Powered Anthology

.” The eBook’s six short stories all deal with real issues seen through the lens of science fiction. 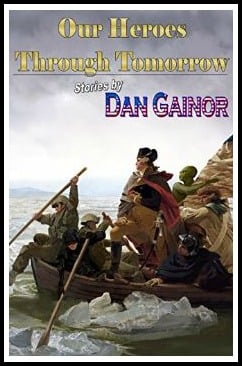 Take “Unintended Consequences,” a look at a future America where nuclear weapons have been banished. Only that sparks an invasion of the U.S. homeland.

Consider “We the People,” which features a patriotic scientist trying to clone the Founding Fathers.

Write What You Know

“I was so impressed with everyone there. All I wanted to do was reflect that and write,” he says. So he penned an opinion piece. That sparked something more … unusual.

What if the carrier faced something not of this earth? Gainor’s affinity for science fiction took it from there.

Gainor may have a successful career blowing the whistle on media bias, but he always felt the urge to write science fiction. He grew up marveling at tales told by Robert A. Heinlein, Andre Norton, C.S. Lewis and J.R.R. Tolkien.

”As a reader I enjoy the worlds that people create so much. I just wanted to do it myself,” he says. To do that, he drew inspiration from a modern author who also happens to lean to the right.

“Brad Thor has been very influential to me,” Gainor says of the author’s ability to generate page turners.

Then again, Gainor also praises both the late Tom Clancy and Oscar-winning scribe Aaron Sorkin, known for his unchecked liberalism. He applauds their ability to tell a story while adhering to their specific world views.

It’s something he can’t help but inject into his own stories. It’s why he writes a more positive brand of science fiction.

“I don’t want to write things that make people feel bad,” he says. “Science fiction used to be uplifting.”

Gainor isn’t not averse to making his heroes fall on both sides of the aisle. He points to a ghost story he once wrote featuring a strident Democrat who saves the president.

“You write the characters that fit the story,” he explains.

Pop Culture and the Voting Booth

He still understands the power of pop culture in modern times.

“Everything is downstream of culture, politics, business and art,” he says. And he doesn’t like the trend he’s seeing of late.

“We’ve gone through a couple of hundred years of this country. Culture was a positive reinforcer of all that was great and good. Now, it’s 180 degrees the opposite … Hollywood undermining morals – patriotism, everything that our Founding Fathers risked their lives and their fortunes and their sacred honor.”

Too often, conservatives refuse to connect with pop culture. That, he says, is a mistake. The right feels like it gets burned so often by content it recoils from it altogether.

“That’s exactly the wrong reaction,” he says. “Conservative values are things that people care about.”

“It’s a wonderfully conservative movie even though it’s not pitched as that,” he says of the film, featuring Captain America battling his own friends to keep bureaucrats at bay. “It’s someone standing up against an overpowering government … the reason why we flock to these superhero movies is we like to see good triumph over evil.”