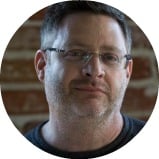 “Dark Arts” is the first-ever play to have an immersive prologue and epilogue, bookending a traditional proscenium show. Contact him at TVWritersRoom [at] gmail.com